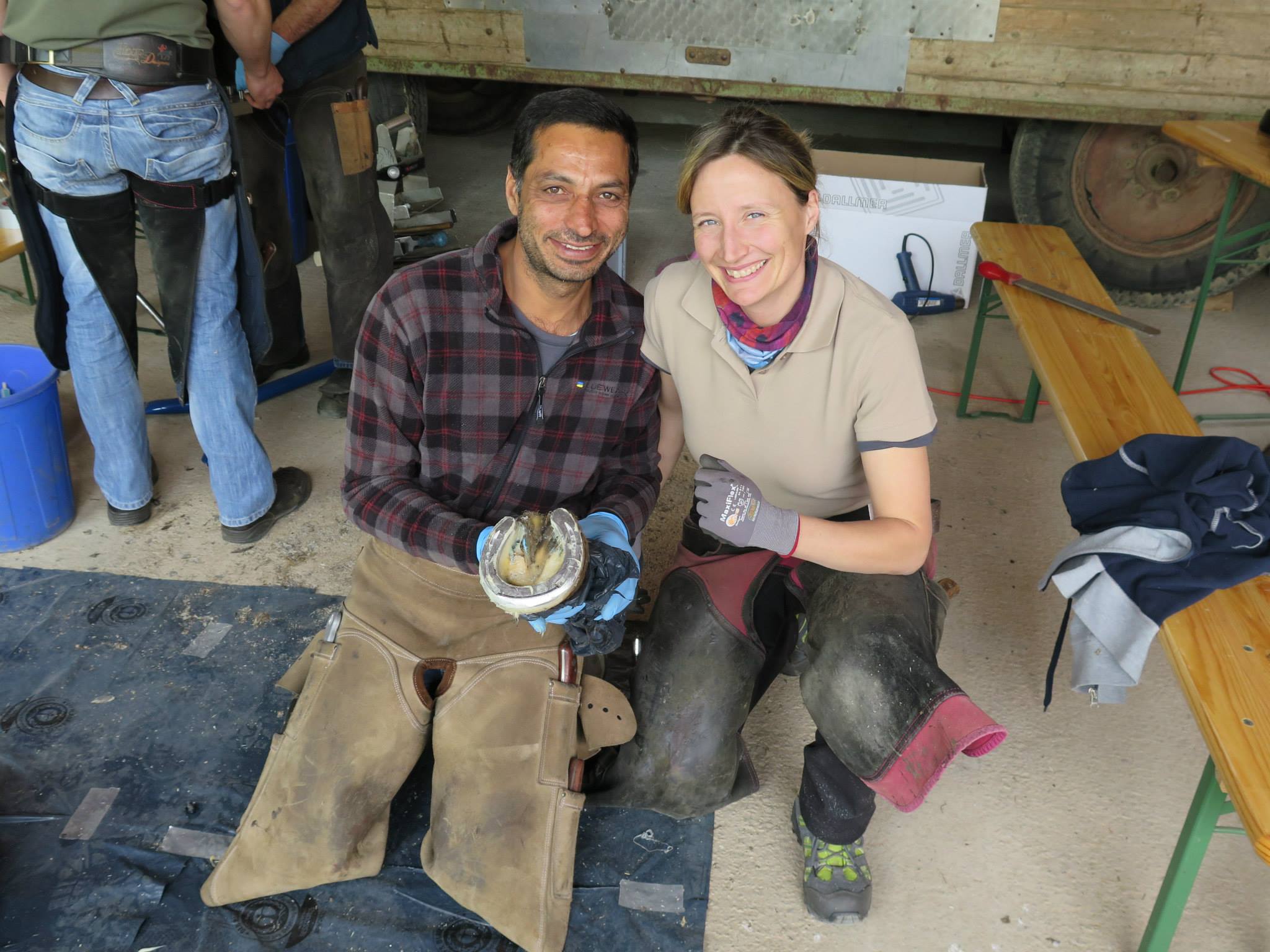 After 3 months spent learning farriery in several countries in Europe, Sahib Parminder Singh, the Indian coordinator for the Flying Anvil Foundation (FAF), has returned home with many new ideas and is eager to get back to work. Singh is a graduate of the foundation’s farrier school in India, the FAF Farriery Institute of Dunlod, and the FAF did the following interview with Singh following his return from Europe.

The Flying Anvil Foundation writes, “Thanks to our crowdfunding, our Indian coordinator, Sahib Parminder Singh was able to train for 3 months with farriers in several countries in Europe. Once again, FAF would like to thank all the contributors of this crowdfunding, Werkman Horseshoes for kindly inviting Sahib to the Spring Games and all host-farriers who have welcomed him and worked with him to share their knowledge!”

How do you feel after these 3 months traveling around Europe?

“After 3 months in Europe, I feel happy to go home. I want to get back to my work quickly because I have so many ideas in my head,” Singh told the FAF.

“I want to get my notes and photos in order and get to work. I also wish to share with other farriers and students what I have learned here and help them improve their own work.”

What did you learn in each of the countries you visited?

The Netherlands: “Preparing for the Games with the Werkman staff, I was amazed at the number of forges and anvils in the competition venue, and then once people started arriving, I was rather overwhelmed by so many unknown faces all coming together for the same purpose: farriery and forging. As time went by, I became acquainted with many farriers from all around the world, and I made new friends who helped me with my questions. I attended several lectures, all in English, and was impressed by the audience’s participation in questions and answers. 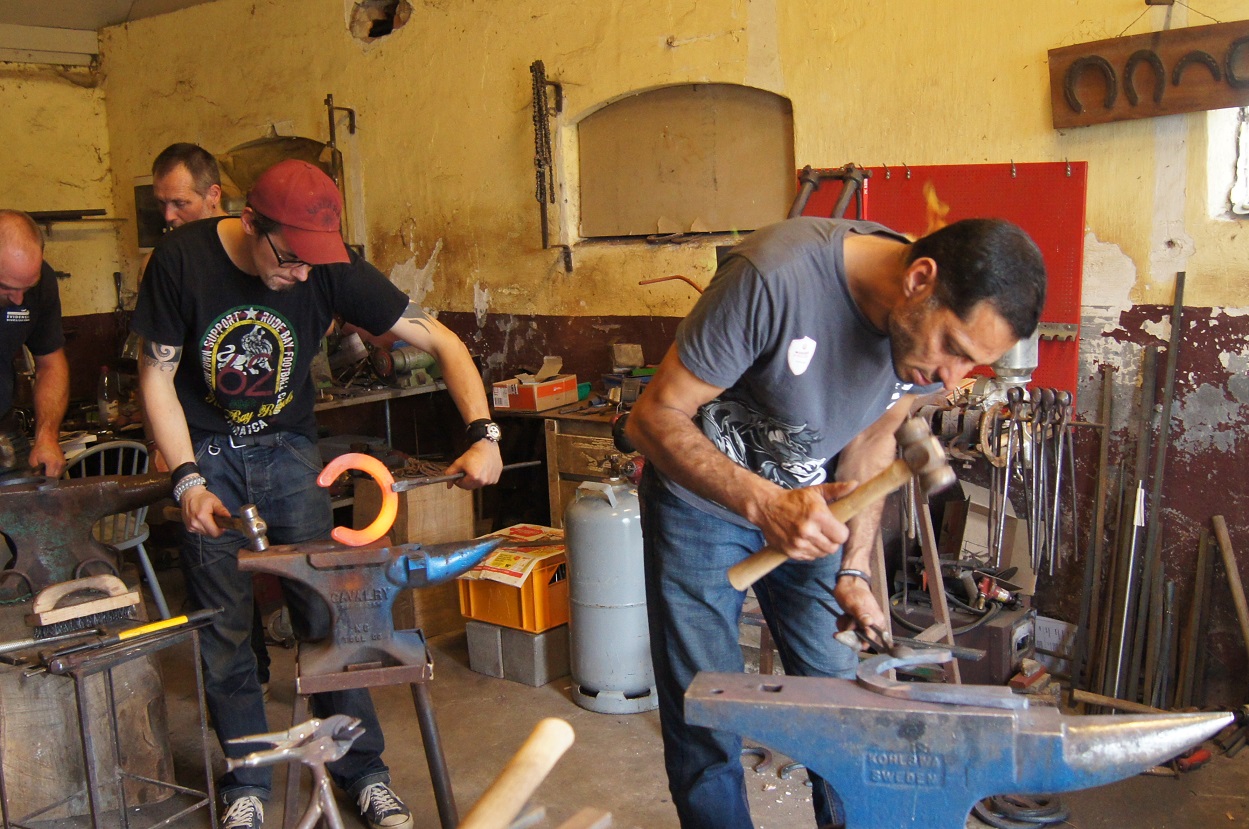 “On the practical side, I observed different forging techniques and a huge quantity of farrier equipment and tools at all the commercial stands there. I found out about different types of shoes, even glue-on shoes.”

Sweden: “I worked on draft horses for the first time with a farrier named Uno. I had lots of opportunity for forging. I went shoeing one day with Uno to an island and we had to take a ferry.”

Norway: “My short stay with a farrier named Bengt mostly gave me trimming experience. We went to the police to shoe their horses and I spent some time forging with Bengt’s staff and visited his farrier supply shop. I was also interviewed by a Norwegian journalist.” 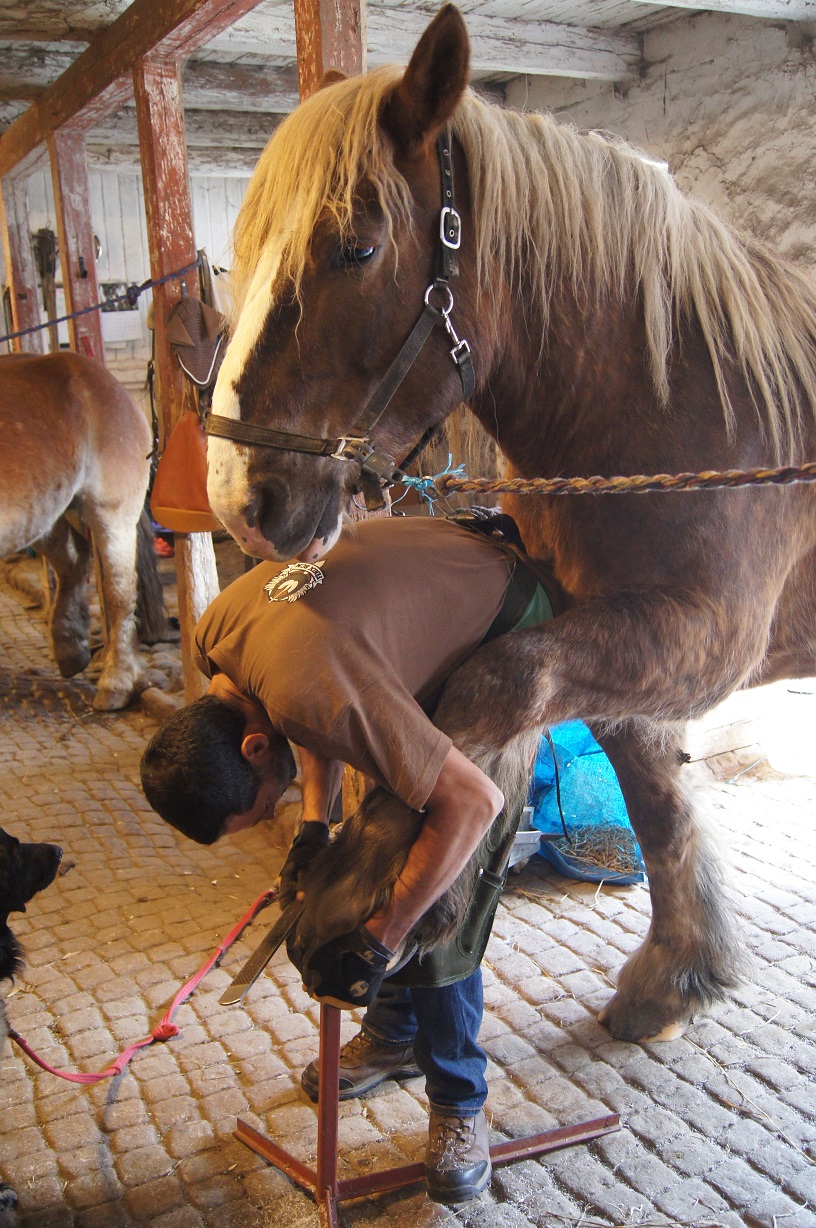 Finland: “With Riina, a Finnish farrier, I worked for 14 days on horses and ponies, and in my forging practice I improved my toe clips and clinching.

“In cases of chronic laminitis, I learned to situate the position of the pedal bone and correct the break-over, even with no access to x-ray. I also saw farriers using wooden shoes for laminitis treatment.”

Germany: “First in Bremen, I had a chance to clarify many points about anatomy with a German farrier named Charlotte, which was important as I had a lot of questions. We went to a workshop on gluing techniques for shoes, and did some gluing on foals for conformation correction. I also went to visit the Dallmer factory where plastic shoes are produced and there was a focus on corrective shoes for foals. I had the chance to meet Mr. Dallmer, who is a very old man and precursor in plastic shoes in Europe in the 1980’s.

“With a farrier named Jenny in Leipzig, I saw a full horse dissection for the first time. I also made a dissection of the limb on my own, which gave me confidence. 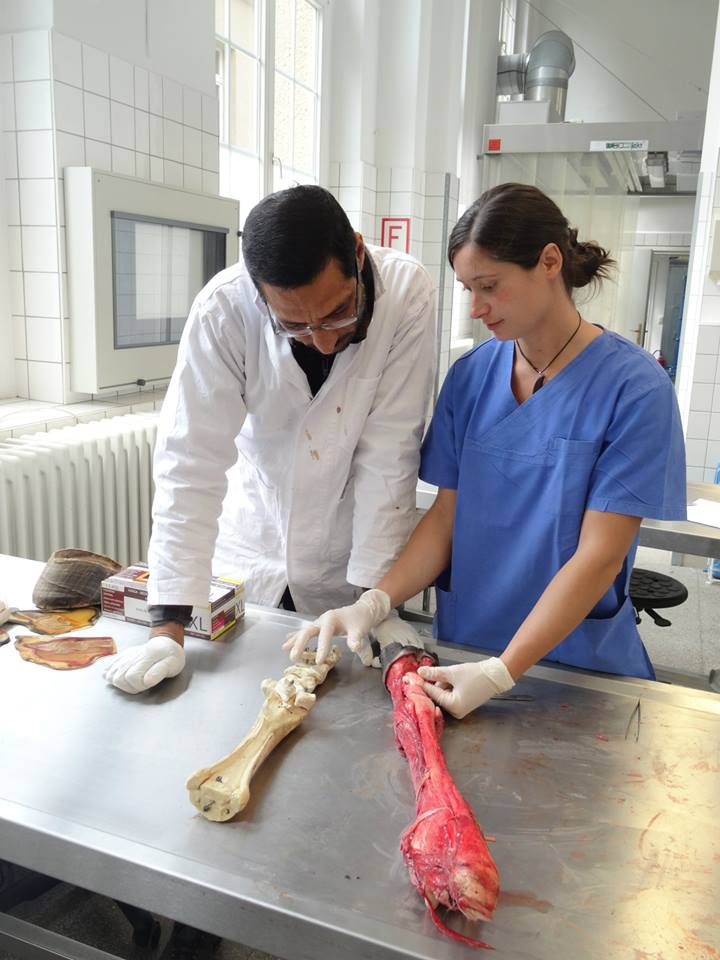 “With a farrier named Andi in Bavaria, I visited the very large Bavarian Stud Farm where he occupies a teaching position in the farriery school. I also attended 2 workshops, one on aluminum shoes conducted by a famous French farrier, Antoine Corona, who developed a full line of aluminum shoes that are very well known to farriers working with performances horses. I attended another one on lameness with Hans Casteljins. I learned to be very methodical in the analysis of the foot (pulse, heat, hoof tester, etc.) and systematic in the analysis of limb pain. With Andi, I did lots of hot shoeing and had a chance to work with young horses and sport horses (show jumpers, dressage and driving).”

Switzerland: “I had extended practice with forging. I helped with the FAF annual ‘Forge en Fête’ event at the workshop. I did a forging demonstration and I also made small shoes as key rings for the visitors.”

What kind of farrier novelties have you discovered?

“Farrier novelties I saw were glue-on and aluminum shoes, hot shoeing and dealing with some cases of lameness.”

Will some of the tips you have learned during this trip change your way of working? Which ones? 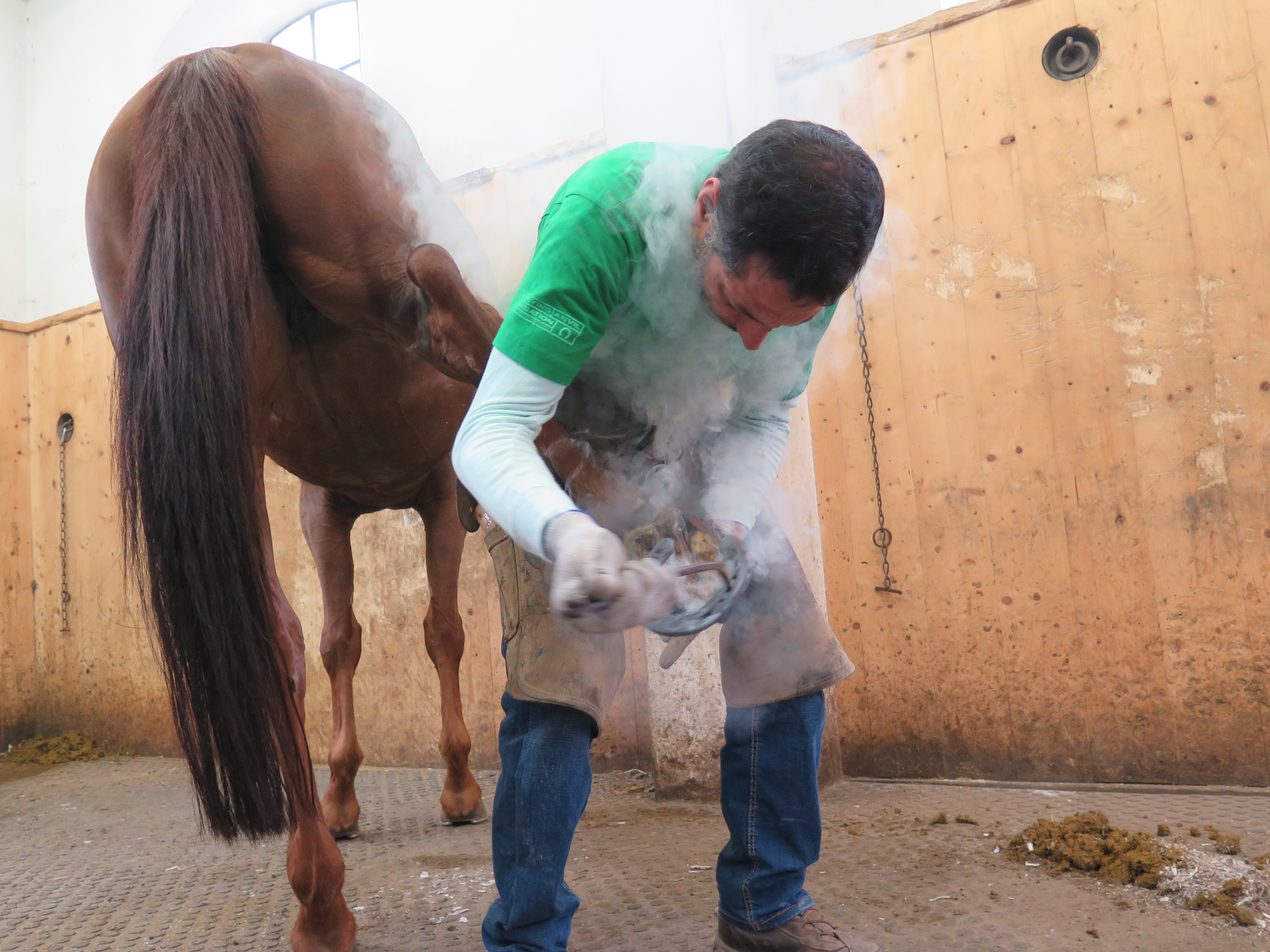 Did you notice different ways of working and practicing farriery in the different countries you visited?

“There were differences between the countries. Some countries do less hot shoeing, but in Germany and Switzerland I saw they use hot shoeing all the time, and favor spikes for grips on road surfaces. In Finland they use a lot of pads because of the stony grounds.”

What is the most important thing you learned that will be useful for the well-being of horses in India?

“The most important points I learned for use in India are:

·      Improving my work with young horses and foals by correcting their conformation through good trimming.

·      Fitting a mobile farrier van as I saw in all the European countries. Having a fully equipped vehicle will help me to show a way to improve farriery by carrying all the equipment with me in the many different places of my country that I visit. It will also help organize workshops at horse fairs and in villages.”