By Jeremy McGovern posted on October 7, 2015 | Posted in Education, Shoeing

Dozens of farriers ventured to Burlington, Wis., to attend the Oct. 3 Centaur Forge clinic. Jacob Butler, an instructor from the Butler Professional Farrier School near 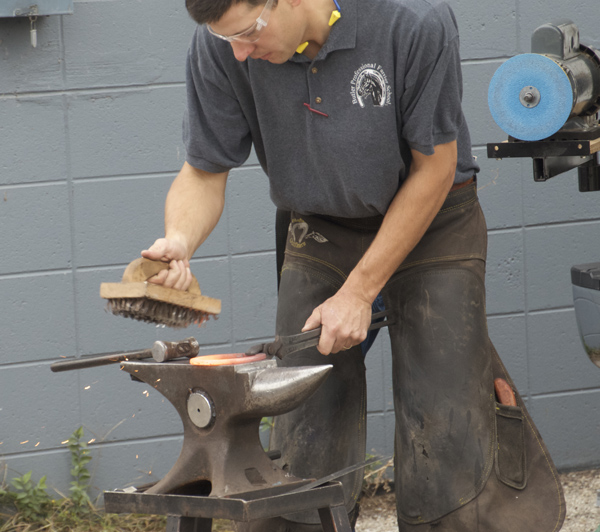 Butler was presented with a horse suffering from navicular disease. After an initial evaluation, he stressed the need to work with a veterinarian in cases as this for the best possible outcome for the horse.  Butler then discussed how he uses hoof testers in evaluation, in particular for a horse in which the owner reports it has navicular issues. In such cases, Butler recommends starting and continuing in other areas than where the problem is reported before testing the area of reported soreness.

“I like to have something to compare it to,” he says. He then moves to the other forefoot and tested it, again saying it is beneficial to have more input for comparison.

After trimming the forefeet, Butler opted to make egg bars. Showing how he measures feet, Butler uses a tape measure to gauge the circumference, then a W Brand metal ruler to measure the distance between the heels. Measurements provide a fixed number, but Butler reminds that the farrier must consider all steps in the process and what goal is to be accomplished to in the forge work.

“There is not a solid, one way of doing things — we all work with steel a little differently,” he says.

Butler likes to make the shoes at the horse for a demo of instruction, but says he prefers making bar shoes in his home shop. He says you should consider the owner’s time when you are making shoes.

Efficiency is important when forge welding shoes. Butler likes to have everything he needs laid out and ready to go. He wants to avoid stalling that allows the heat to be drawn from the shoe he is working on. Be mindful of the shoe temperature, too, when working on the weld. Continuing to hammer after the shoe has cooled can lead a farrier to thin out the metal and cause the weld to weaken or break.

“Often, the mistakes we make is that we keep hitting, because a couple more hits will make it right, but that isn’t the case,” he says. “You have to make a decision whether to continue or start over. Oftentimes, it is better to understand that mistake and start over, rather than spending the time trying to fix it. This will prepare you for the next time that you don’t make the mistake again.”

Building on the anatomy review, Butler then opened the floor for discussion on shoe choices. He advocates for keeping the client well-informed about the choices you make. In therapeutic cases, provide clients with enough information, realizing they are the ones ultimately who make the decision.

“We live in a different age when the horse became more of a pet than work animal for many owners,” he says. “It isn’t unreasonable to think that some owners can pay for treatments.”

[Video] G.E. Forge & Tool How-To Clinic: Registration, Certification and Licensing. What Does It All Mean?

Anatomy And Fractures Of The Coffin Bone