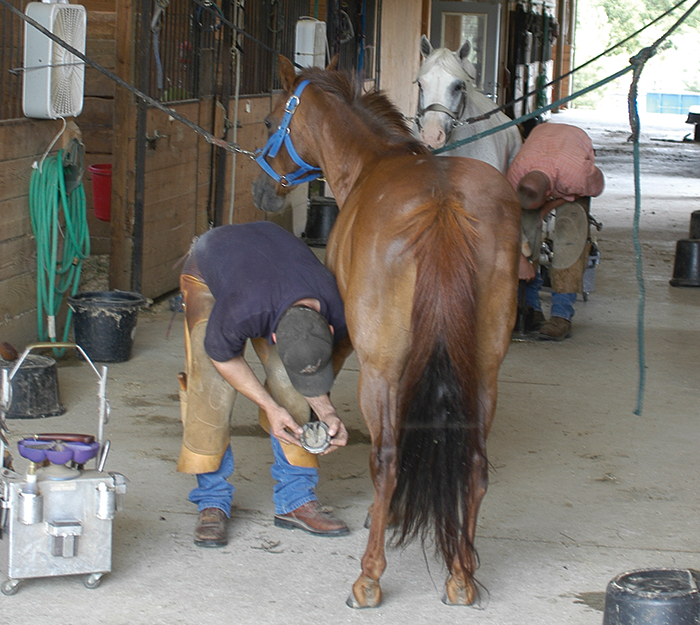 By Pat Tearney posted on December 1, 2004 | Posted in Business Practices

Scheduling gets tricky when a horse show intervenes

TEAMING UP. Farrier Hank Highfield checks the shoe fit on one pony as apprentice Ryan Clarke works on another in the background.

Some days just don’t start out well. Hank Highfield, the normally affable farrier from Indianapolis, Ind., is clearly a little miffed as he sets up his shoeing rig outside thevbarn at his first stop of the day.

“Now they know I’m here every Tuesday,” he says with a brisk shake of his head. “Wouldn’t you think they’d have called me and told me almost all the horses were going to be gone at a show?”

It’s a big, pleasant barn on the north side of Indianapolis, surrounded by paddocks and fields. It looks like the perfect place for a day’s shoeing.

Only problem is, it’s almost empty.

“I’ve been trying to get them to give me a show schedule for years,” Highfield says. “I was planning on shoeing eight horses here today. Instead, we’ll do three.”

But Highfield isn’t about to let this little problem ruin his day. As his apprentice, Ryan Clarke, begins bringing out one of the horses that is left at the barn, Highfield is

already on his cell phone, flipping quickly through his shoeing book and lining up some more appointments to fill his suddenly open day.

Sometimes, when you’re Shoeing For A Living, you just have to make adjustments on the fly.

7:42 a.m. It’s a sunny July day in central Indiana. Although it’s been a generally cool summer, Highfield likes to get…

Rig Getting Expensive? Try Putting it on the Payroll

Shoeing Together in the Heartland