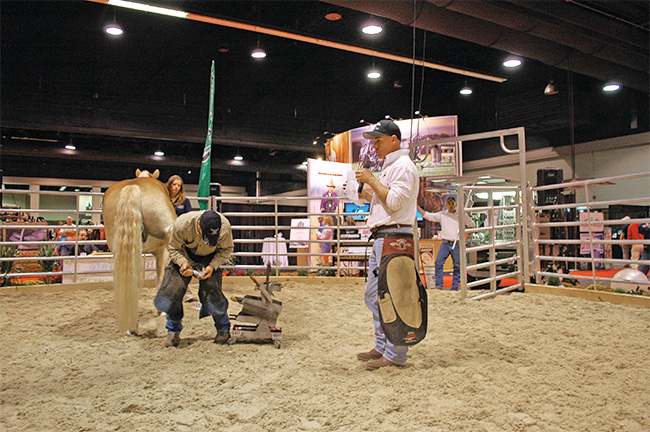 Farriery And Outreach At The World Equestrian Games

By Jeremy McGovern posted on December 1, 2010 | Posted in Business Practices

Mitch Taylor, right, of the Kentucky Horseshoeing School explains his approach to shoeing this horse at the International Equestrian Festival held during the World Equestrian Games.

hile the 500,000 attendees of the 2010 World Equestrian Games (WEG) in Lexington, Ky., cheered champions, the American Farrier’s Association helped make sure that the horses and riders could compete. From the preliminary events to the closing ceremony, the AFA volunteered so events would run smoothly at the Kentucky Horse Park.

AFA volunteers paid for their own travel, as well as room and board to work at the Games. An important mission of the AFA was to provide hoof care for competing horses. AFA members had to submit a resume and letters of recommendation to the AFA’s WEG Committee. Eighty-one members provided their services during all events of the eight disciplines.

Each event had three teams of volunteers, with three shoers serving on each team. One team would handle horses prior to the event, the second was on duty during the event and the final group would cover the end of the event and following it. The need for volunteer farriers to handle shoeing varied by discipline, although reining and eventing seemed to have a higher need for the AFA members’ services.

Many national teams brought their own farriers, who in turn used the AFA’s help. Eric Nygaard, president of the AFA, mentioned how he helped an Australian team farrier shoe his horses prior to…

Teamwork Is Crucial At The World Equestrian Games