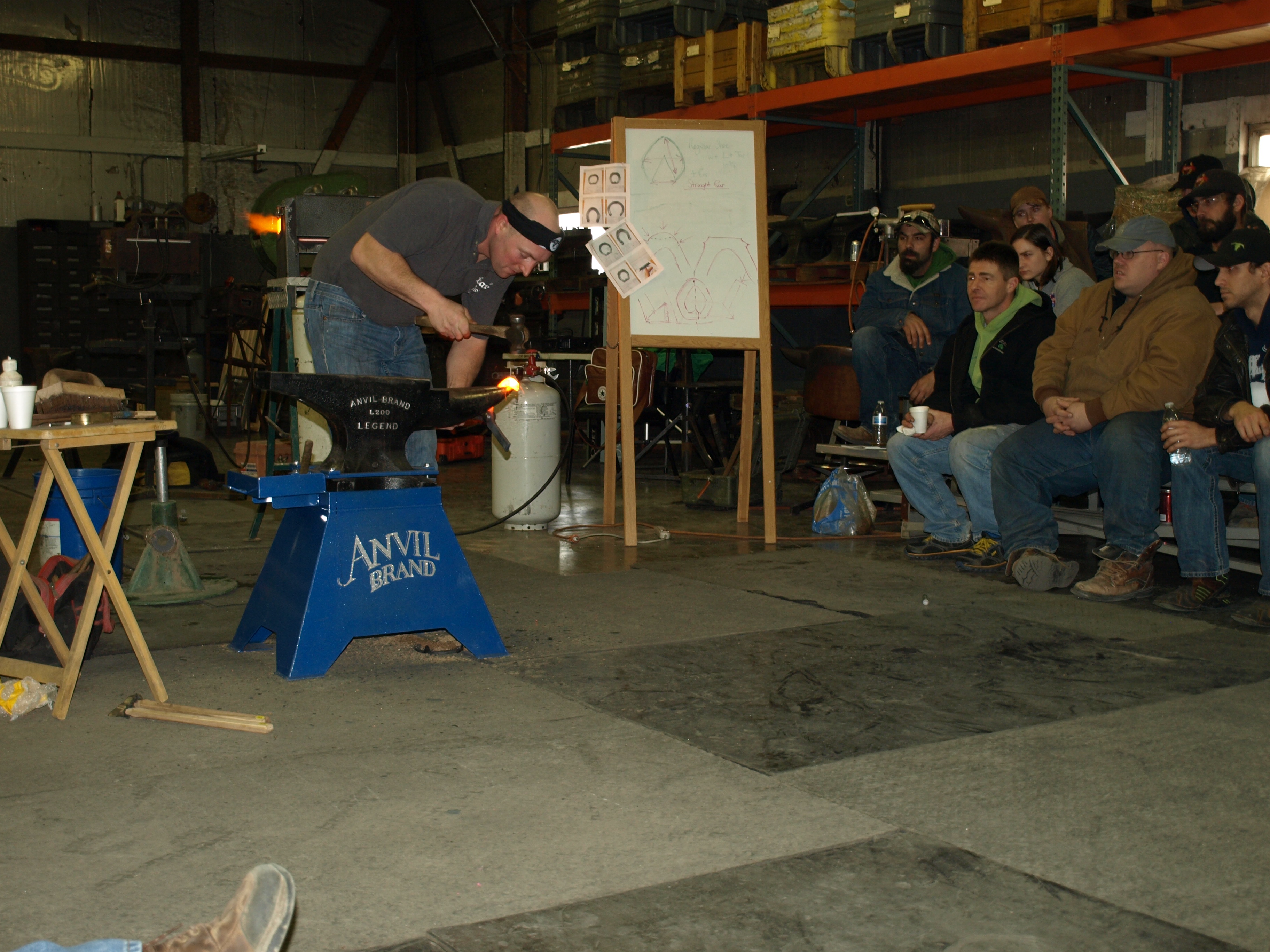 On Valentine’s Day weekend in Lexington, Ill., Anvil Brand Shoe Co. and the Land of Lincoln Horseshoers Association hosted another great clinic with one of the world’s top farriers, Steven Beane of North Yorkshire, England. Beane, as most in the farrier world know, is a valid rock star among farriers worldwide. He is a five-time World Champion Blacksmith, two-time European Champion and two-time British National Champion. He has been selected for the English farrier team 13 consecutive years and is a renowned judge and clinician. Beane has introduced a great line of farrier tools tested in the crucible of international competition. It ranges from many great knife styles to a full line of fullers. Introduction into the U.S. market has been well received.

The 2-day clinic was well attended and had something for everyone. Attendance was over 100 the first day. Beane is not just a contest farrier. Some have the idea that a contest farrier practices shoe making all the time, honing their contest skills. Although watching Beane build shoes is something to behold, it all comes down to horseshoeing. His complete skills around a horse are those worthy of the title World Champion. We would all be hard pressed to find many that could keep up with his skill and proficiency in daily work, whether it’s in a back yard or a show barn.

Steve started Friday with a power point telling about himself and the path that brought him to where he is today. He explained that without proper fundamentals, high achievement in this trade is difficult. From an early age, he knew he wanted to be a farrier.

I had the unique opportunity of spending a little time in his shop on the cultural exchange I went on and working with Huw Dyer, who was Beane’s Approved Farrier Trainer through his internship. Dyer has trained an amazing 40 registered farriers in his career. He told me that when Beane came to him to interview, he hadn’t had the best grades in some classes. Dyer told him if he were to get an apprenticeship, he would have to work hard and bring up his marks or he would not be allowed in the program. Beane showed the same drive and determination then in brining up his grades as he has in his farrier practice, contest endeavors and educational and clinician’s achievements.

Beane stressed the importance of knowing the fundamentals of the horse. Know your subject. What we do for a living encompasses horsemanship, skills in the forge, anatomy, physiology, people skills, as well as business and organizational skills. But it all starts with the horse and how they are made and do their given job. 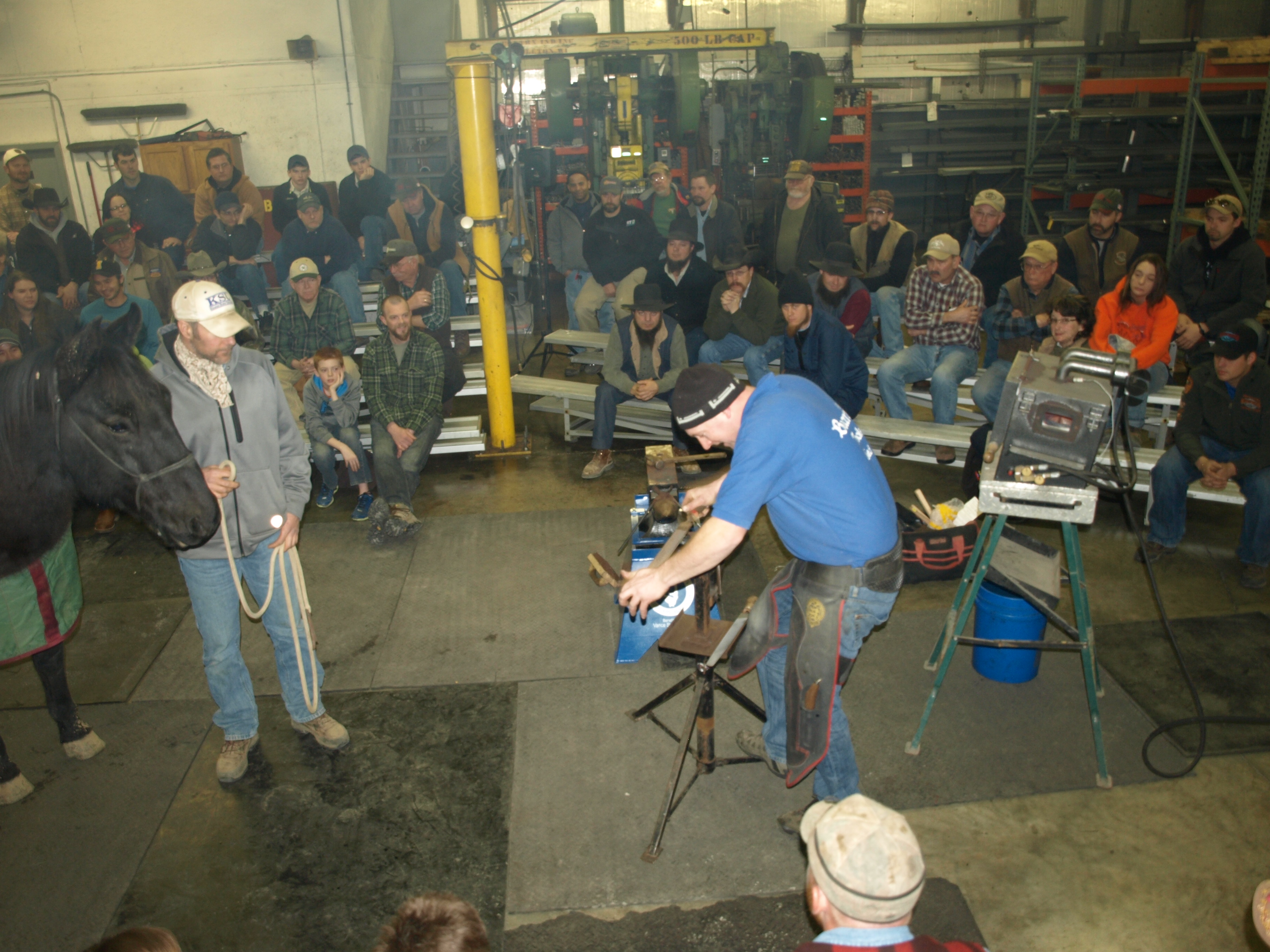 Beane has achieved a high level of education in receiving his Associate of the Worshipful Company of Farriers (AWCF). He is working on achieving his Fellowship currently (FWCF). These tests are the most rigorous standard of testing worldwide. He runs a multi-farrier practice along with his wife Sarah, who is a member of the Scottish farrier team.

Beane shod a horse half with handmade shoes and half with kegs to show that it’s not all about shoemaking and stressed the fundamentals of stock selection, fit and proper assessment of the horse and appropriate application of shoeing to improve performance by maintaining a strong, healthy hoof capsule. He stressed, once again, the fundamentals of proper shape, fit, nailing, clinching, to “do no harm” and hopefully leave the horse better than when he came. This type of attention to detail and dedication to excellence in every aspect of the job was apparent throughout the clinic.

This led us to lunch where Anvil Brand always takes great care of the farriers in attendance, feeding us well throughout the clinic. After lunch, Beane proceeded to a topic he’s been observing and incorporating into his work for some time. It’s based on the fundamentals, again, of preserving a healthy hoof capsule and working toward an even stronger and healthier hoof if possible, the next time. He calls it “dorsal wall rounding.” 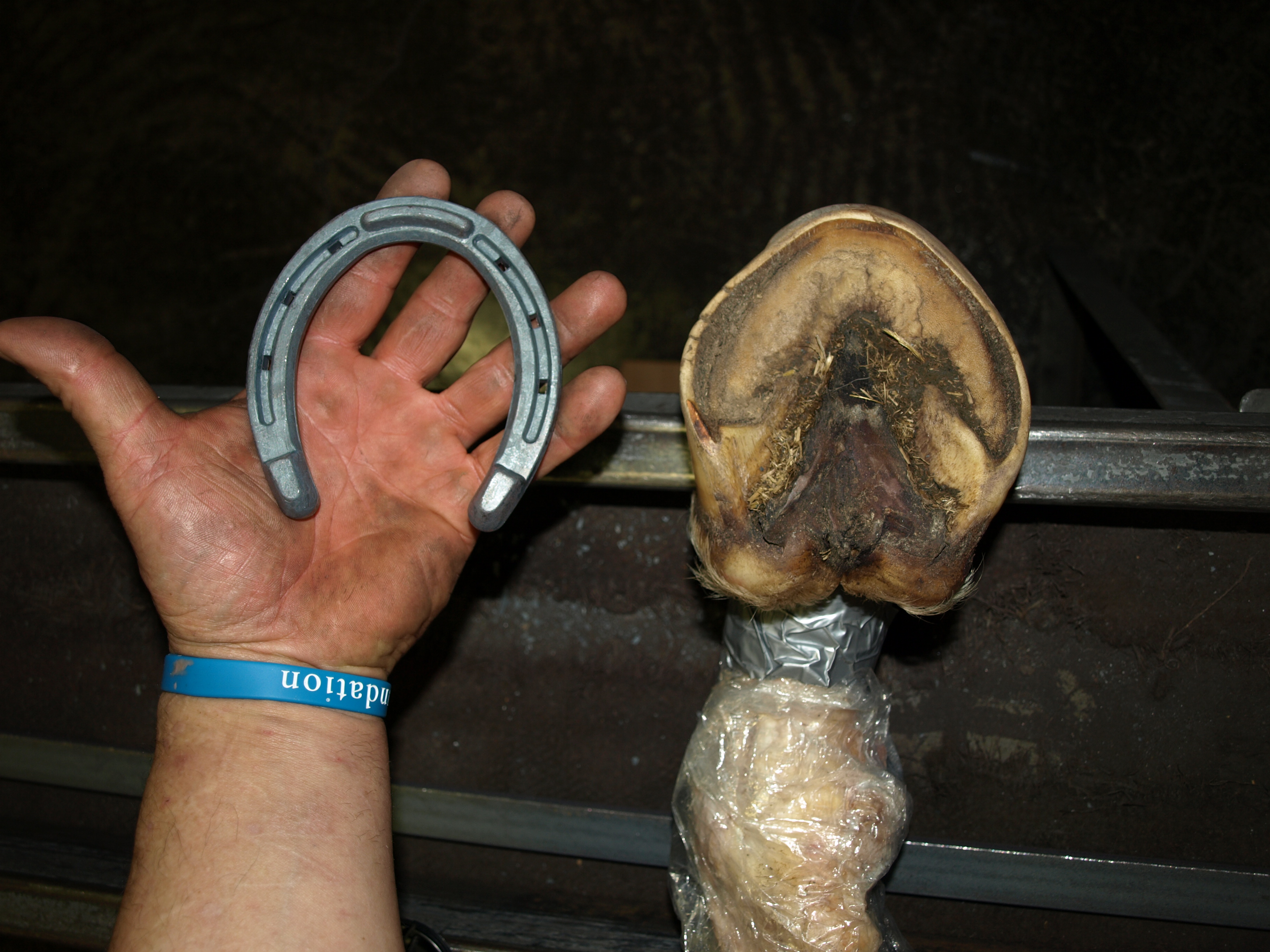 This image is a before shot of the shoe Steven Beane used to forge the straight bar shoe for the eagle eye contest.

Dorsal wall rounding could be confused with dubbing by some and can carry a poor connotation. In fact, the process is simple and something I see all the time. We often see a horizontal migration or flare as the most obvious example of distortion of a hoof capsule. The hoof can sometimes widen it’s margins at the base due to ground forces meeting the weight of the horse with the angled plane of a hoof wall between the two. As the wall drifts away from an ideal tightly connected and uniform attachment to the coffin bone, we see this migration. Many in the U.S. would call the reigning in of these distortions, “gathering up” the hoof wall.

Beane showed numerous slides of case studies he’d collected. He showed how following the inside margin of the white line as his guide, he created a uniform wall width around it that represented the true shape of the internal anatomy more absent of distortions. Shaping and attaching a section of steel that was typically double the thickness o this margin gave him the best “collar” to hold that capsule together in an effort to train it back into form. The “dorsal wall rounding” comes in then in how the hoof gets top dressed around the base he established, which references the anatomy. If he straight lined this wall with his rasp down to this margin, there are times where the wall could be robbed somewhat of its thickness and strength. If the wall is weakened there, it would possibly contribute to further flaring or migration. But, by “rounding” this margin and not blending it all to the plane of the top of the capsule, greater strength can be maintained and over subsequent cycles better success could be made to “gather up” the capsule entirely into a stronger, healthier structure entirely conforming to a uniform attachment from hairline to ground surface.

I think it’s important to note that this type of hoof will more likely be found in wetter environments, such as England. Beane said he would see a different kind of distortion in the desert of New Mexico. 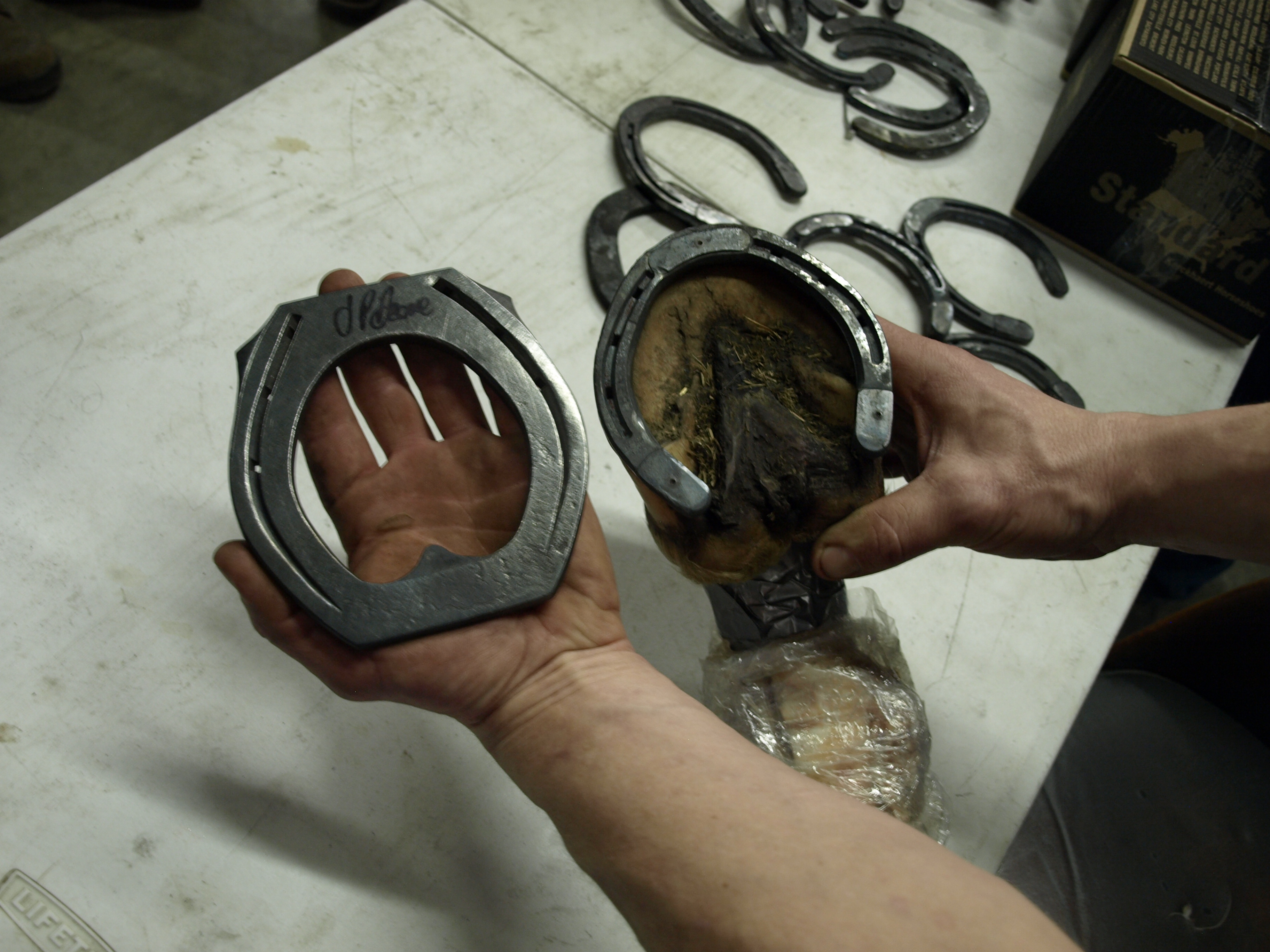 On the left is the French hind shoe that went to the winner of the eagle eye contest alongside the winning shoe by Javin Kropf, CJF, of Arkansas, on the right.

We concluded the afternoon and in gracious and traditional Anvil Brand fashion, Anvil Brand took any and all farriers present out for a Friday night fish fry at a local pub. The Anvil Brand people really know how to treat farriers, obviously with food and beer!

Saturday began with more case studies, one after the other. Beane had done a great job of documenting his work in the field and learning many lessons from the horses that have made him think along the way. He wanted to do something hands-on and hoped we’d have another horse, but we did not. We did however have a cadaver leg we brought for a lunchtime one heat eagle eye contest. Beane showed in detail how he would measure, map out and build a straight bar for the hoof. This was a great lesson for those attempting their journeyman bar shoe. It didn’t matter how you measured your foot for your shoe. It could be length plus width plus 1 inch and 1/2 inch or perimeter minus 2 inches. Whatever your system, measure and mark your middle section of stock to represent the margins of the hoof heel to heel and add what you would need for the bar depending on the width of the heels. As Beane built the straight bar, he saw the foot within the shoe with every bend. He illustrated on the foot as he was halfway done that it fit and represented half the foot exactly. It fit just a bit tight to account for the length the fullering would add.

Beane also demoed the French hind straight bar shoe, which was one of the upcoming shoes for the Madison, Wis., World Championship Blacksmiths contest in April. 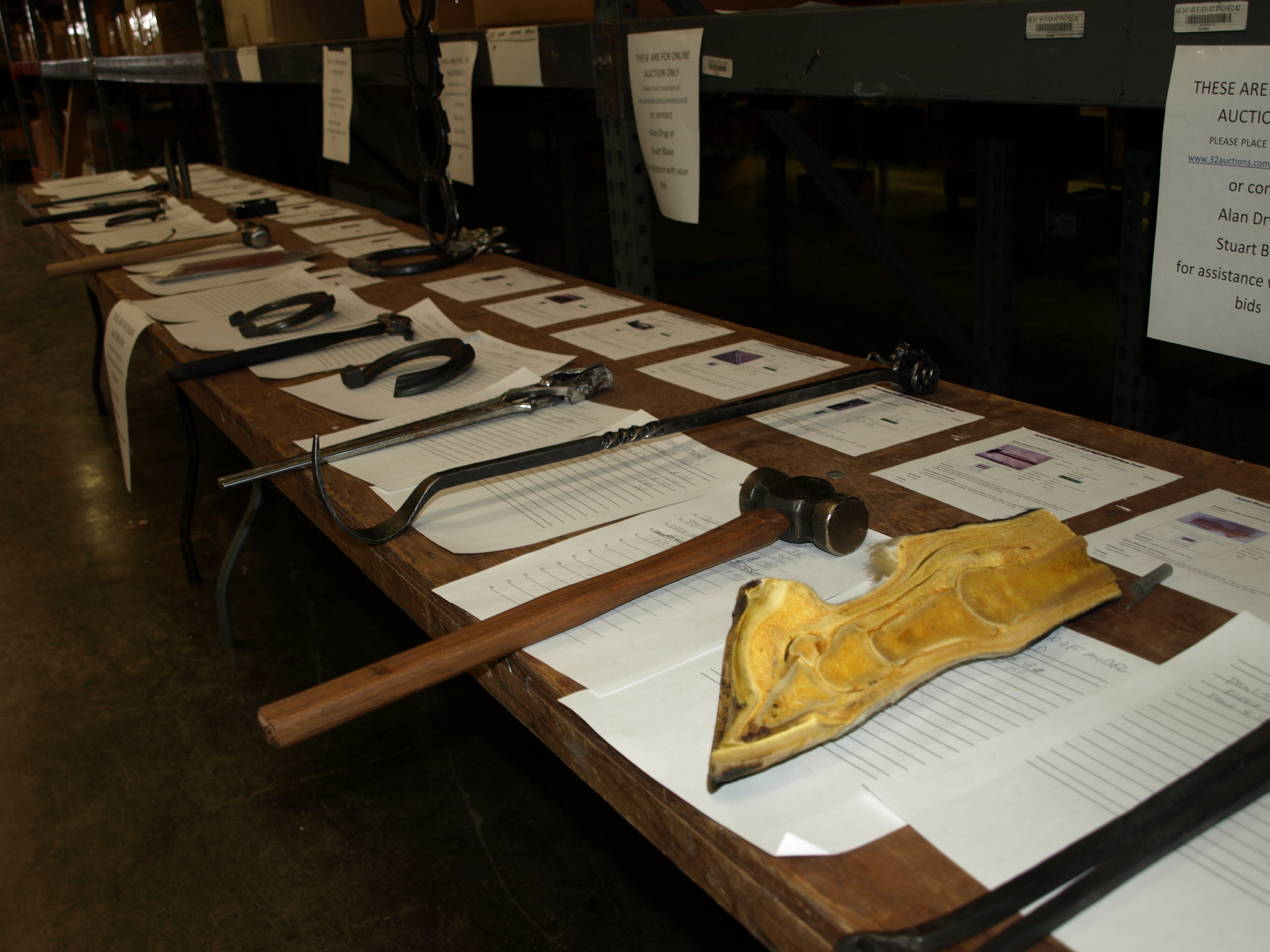 All of the money raised through the contests and auctions at the clinic went to the family of Illinois farrier Vance Sterenberg, who lost his battle with cancer just days after the clinic.

At lunch, Beane judged our Land of Lincoln Horseshoers Association bring-along shoe contest. Beane donated tools for prizes to the top three places. Joe Nygren, CJF, of Wisconsin took first place. After lunch, we set up for our one heat eagle eye contest. Anvil Brand donated the perfect keg shoes for the little hoof we had. The shoes were little toed and heeled shoes, which required a bit of forging down on the toe bar and heels to get it to come to size. From there was what seemed to be a pretty simple spade shaped hind.

The winner was 16-year-old Javin Kropf, CJF, of Arkansas. It was a great moment for Kropf to beat out top competitors! He won Beane’s French hind, which he’d made earlier.

All money raised in the contests, as well as our auction of donated items, went to long-time Illinois farrier Vance Sterenberg’s family, who had been fighting cancer for 6 years and lost his battle just days after the clinic. Beane graciously donated four more fullers and knives to the auction to raise money. Altogether, over $5,000 was raised to help out the Sterenberg family with our auction and raffles.

Matt Lybeck, CJF, of Wisconsin brought a shotgun donated by the wife of a friend who had also lost a battle with cancer. The gun as raffled off twice as Matt Huesca, CJF, won the first time and donated it back again. Anvil Brand also donated a gun for raffle. I was lucky enough to gather many unique items from my recent cultural exchange to England as well as many talented gracious donors in the U.S. A complete list of donors and items can be found online at www.32auctions.com/LLHAwinterclinicIFF. Thank you to all who donated and purchased items

Thank you to Anvil Brand and Steven Beane for all their kind and generous help to the local trade. We sure do appreciate it.