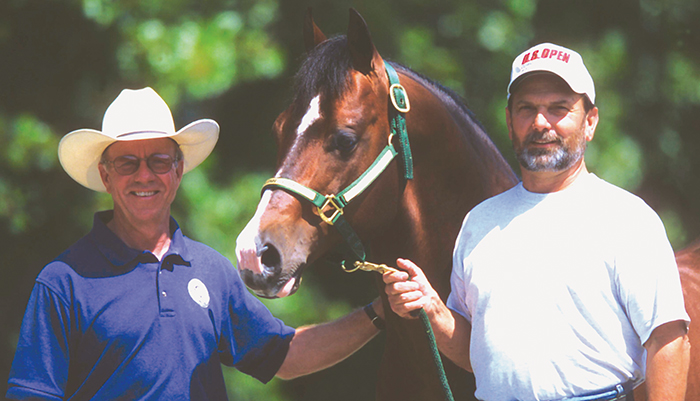 By Dawn Jenkins posted on May 1, 2003 | Posted in Lamenesses

Step-by-step process, teamwork with farriers is the prescription for equine veterinarian

VET-FARRIER TEAM. Equine veterinarian Jerry Black, left, and the late Emil Carré with a horse they worked on together. Black and Carré frequently corroborated on serious lameness cases in a relationship that lasted more than 15 years. Black is a big believer in teamwork between equine veterinarians and farriers.

Black, a former president of the American Association of Equine Practitioners (AAEP), stressed the importance of good veterinarian-farrier relationships. He should know. His own Northern California practice, Pioneer Equine Hospital of Oakdale, Calif., specializes in performance horse lamenesses. Black has worked for many years alongside prominent farriers — including the late Emile Carré, former AFA president — in solving lameness problems.

Black’s customary lameness exam includes obtaining an accurate history on the horse, physical evaluation (observation, palpation, hoof tester exam and flexion test) and gait evaluation. He also takes into consideration what each horse does for a living.

In gait evaluation, Black watches the horse at the walk for distal limb conformation, foot balance, landing and stride length. He pays critical attention to the hind legs. He finds some horses — particularly dressage competitors — won’t show lameness unless under saddle, so his facility has a both a round pen and large arena…