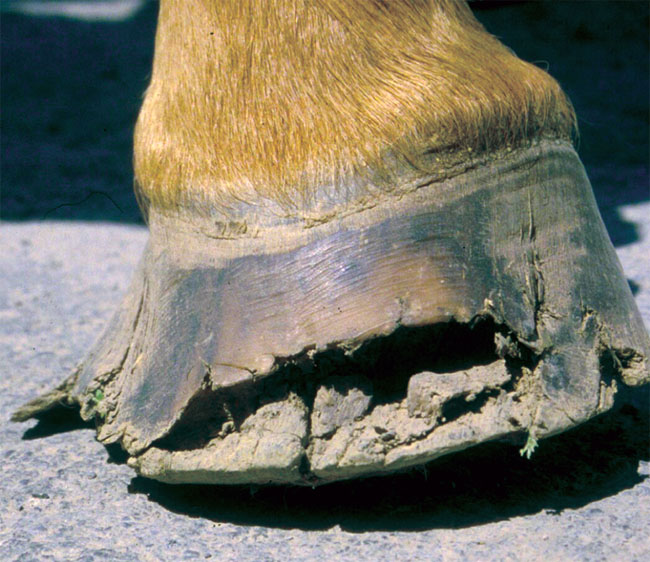 By Michael Wildenstein posted on December 1, 2003 | Posted in Diseases

ADVANCED LESIONS. The integrity and weightbearing capability of a hoof can be destroyed by advanced lesions caused by fungi.

We can now say with confidence that we have a safe and effective treatment method for white line disease, which is a fungal infection of a horse’s hoof. More specifically, my study eliminated any doubts that hoof wall separations attributable to white line disease are caused by fungi that can be treated with a chlorine dioxide solution.

Fungi have long been thought to be a cause of white line disease, but bacteria or yeast have also been blamed. Previous studies did not pinpoint the infectious agent with certainty, leaving the most effective treatment method also open to question. The doubts surrounding the disease are mirrored in the many names by which it has been known through the years.

The term “white line disease” has been given to the progressive separation of the hoof wall of the horse. The term is used prominently today, though it is used interchangeably with “onychomycosis” to describe the cavities formed in the hoof wall by fungal activity. Onychomycosis is derived from Latin. Onych means claw or nail, mycosis means infection or disease caused by a fungus.

In 1864, Antonio Pires described hoof wall separation and its treatment. His anatomical description of the wall separations were accurate and define the condition in the horse’s hoof that we call white line disease.

In 1884, A. Lungwitz described “hollow wall” as a separation between the middle layer… Michael Wildenstein is one of only three people in the world to have passed the distinguished Fellow of the Worshipful Com­pany of Farriers examination in the United Kingdom with an “Honors” designation. He is the former adjunct associate professor of Farrier Medicine and Surgery in the Department of Clinical Sciences of the College of Veterinary Medicine at Cornell University.

Getting To The Bottom Of Toe Cracks