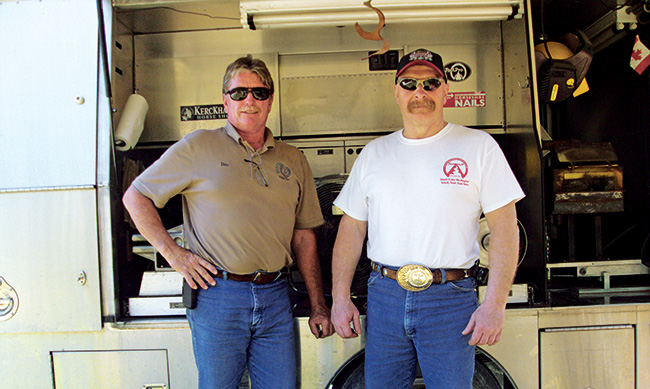 By Pat Tearney posted on September 1, 2010 | Posted in Shoeing

Dave Farley, left, and Tom Martin with Farley’s shoeing rig in Wellington, Fla. Martin, a farrier from Auburn, N.Y., joined Farley in Florida for 3 days, courtesy of Farrier Product Distribution. As an educational partner of the International Hoof-Care Summit, the Shelbyville, Ky., company sponsored a “Day With A Clinician,” drawing which Martin won. Farley, a member of the International Horseshoeing Hall Of Fame, is a clinician for FPD.

Tom Martin is far from a novice farrier. He’s been shoeing horses since 1975. Still, the farrier from Auburn, N.Y., says he had an eye-opening experience earlier this year when he spent 3 days in the Wellington, Fla., area with International Horseshoeing Hall Of Fame member Dave Farley.

Farrier Product Distribution of Shelbyville, Ky., sponsored Martin’s trip. Martin’s name was drawn as the winner of a “Day With A Clinician” prize while he was attending the 2010 International Hoof-Care Summit in Cincinnati, Ohio. As an educational partner in the Summit, FPD agreed to reward one attendee with a personalized shoeing clinic. In this case, the trip was spent with Farley, a popular clinician for the company.

As far as Martin is concerned, FPD went above and beyond anything he could have expected. Like many high-end hunter and jumper shoers, Farley spends part of the year shoeing in Florida and part of the year further north. FPD opted to have Martin join Farley in Florida instead of Coshocton, Ohio.

“They bought my airline ticket and paid for my hotel,” Martin says…

Day With A Clinician’ Becomes A Meeting of Saddlebred Shoeing Minds