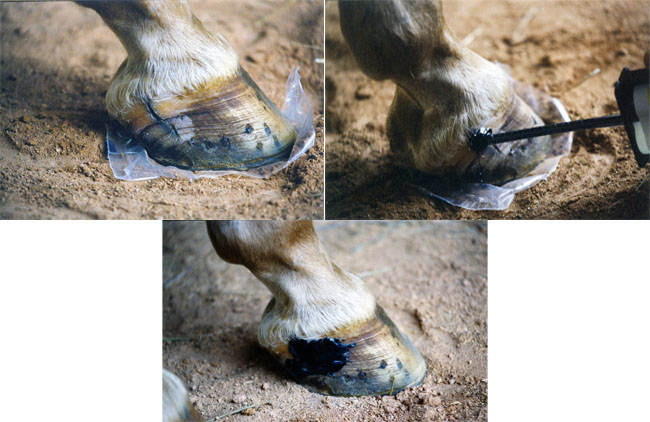 A look at the how, when and why of using these products for various hoof repair and glue-on work

PERFECT PASTE. Using adhesive materials for repairing stubborn problems such as quarter cracks, saves farriers time, labor and money. Red Renchin, an International Horseshoeing Hall of Fame farrier from Mequon, Wis., says it’s critical to keep the quarter-crack area dry and clean prior to applying the adhesive. This prevents the trapping of abscess-causing bacteria within the hoof.

The development, evolution and versatility of today’s adhesive products have made farriers’ lives easier. Repair procedures that used to be extremely time consuming such as rebuilding severely damaged feet, hoof-wall rebuilds due to pulled shoes, quarter cracks, glue-ons, etc., can now be relatively fast-moving jobs.

Red Renchin, the International Horseshoeing Hall of Fame farrier from Mequon, Wis., says that if you know what you’re doing and follow all the necessary application procedures, adhesive products will save you time, effort and money.

“When a horse pulls a shoe off, he’ll usually take a chunk of the hoof wall off with it,” says Renchin. “When the farrier goes to put the shoe back on, instead of having hoof wall to nail it on to, there’s nothing there but open space and air.

“So the most common use of adhesives is to replace the broken portion of the hoof wall that’s missing with an adhesive such as Equilox, which has a similar consistency and texture to the hoof wall. Once the area is rebuilt, you can then drive nails into the hardened adhesive.”

Acrylics, when they set, tend to be much harder than…