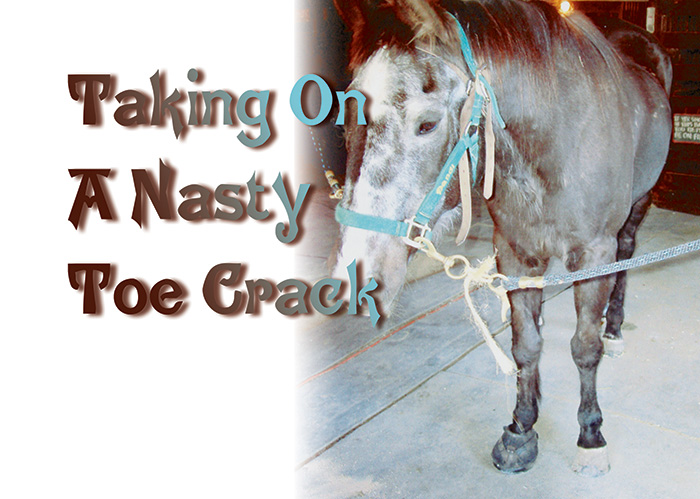 Taking on a Nasty Toe Crack

By Art Miner posted on January 1, 2007 | Posted in Lamenesses, Trimming

Illinois case study covers more than a year of treatments

HURTING HORSE. Dandi, an over-30-year-old horse, was suffering from a crack that ran all the way through the hoof wall when farrier Art Miner was called in on the case on Dec. 9, 2004.

Dandi had been lame on and off for 3 years. He was over 30 years old, but his exact age was unknown (at least to me). I was called in on this case at the suggestion of the farrier who was working at the barn where Dandi was stabled, near Pearl City, Ill.

The initial diagnosis for Dandi (Photo 1) was lameness caused by the pinching of a crack in the front of the left front hoof. The crack was so extensive that each half of the hoof could be moved by hand, independently of the other. This diagnosis was later proven to be correct by his drastic improvement after the crack was debrided and opened up. His lameness immediately dropped from grade 4 to grade 2 on the veterinarian’s scale.

I have no photos of the original crack as I saw it on Dec. 9, 2004. Photo 2 was taken on Dec. 29, during the second visit. Originally the crack was moist and oozing, but did not appear to be infected. By the time this photo was taken, it had dried up very nicely. At this early stage, he was walking on his sole and the whole hoof wall was basically useless.

It is difficult to see, but Photos 3 and 4 show that Dandi…

How to Make an Open Toe Heart-Bar Shoe

They Can’t Get Enough On Balance