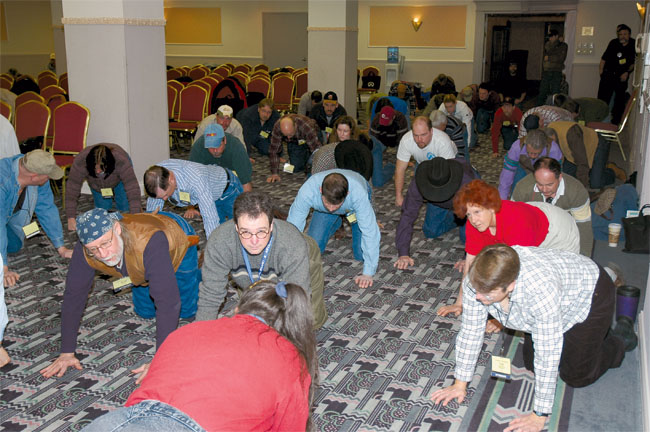 Anatomy disposes horses to lean, a fact overlooked by most riders and farriers, but it could be the underlying cause of the hoof wear and growth patterns that shoers must deal with

HANDS-AND-KNEES LEARNING. A classroom session at the International Hoof-Care Summit gives attendees a chance to learn by feel, as Deb Bennet leads them through exercises that demonstrate the effects that leaning has on horses.

If you start assessing a hoof only after picking it up, you might be missing important evidence that helps explain the condition of that foot, according to Deb Bennett. Instead, start the evaluation by watching the horse move and examining its standing posture. Watch for leaning, she says.

Horses tend to lean, usually favoring one side over the other, because of their anatomy, Bennett says. And chronic leaning can help explain hoof wear and growth patterns, including steep walls or differences between right and left hooves on a particular horse, she adds.

Furthermore, farriers who see these effects on the hoof but don’t understand the root cause could end up incorrectly compensating and, in a worst case scenario, harm the horse, she says.

Bennett heads up the Equine Studies Institute in Livingston, Calif. She also is a horse owner and trainer, gives horsemanship clinics and speaks on the equine lecture circuit. She is not a farrier, but has earned a doctoral degree and describes herself as a biomechanic trained in analyzing the structure and movement of horses.

Bennett believes so strongly in the ties between form and function that she told attendees at last winter’s International Hoof-Care Summit that biomechanics could form the basis of a new paradigm for farriery. She describes a paradigm as a…