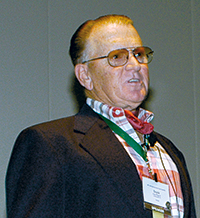 His accomplishment didn’t go unnoticed, as more than 60 people gathered at a Dixie, Texas, restaurant on March 5 to celebrate. Family, friends, trainers and fellow shoers came to see Blagg receive the award and share stories from his 54-year career.

Addressing those gathered, Burleson, Texas, shoer Pat Burton credited his meeting Blagg as a moment that accelerated his understanding of what it takes to be a top farrier.

Taken aback by how many members of the equine community attended the party, Blagg says, “It is an honor to be included in the Hall with so many accomplished people who have taught me, but it is also amazing to have that many respected people of the horse industry show up.”

Blagg’s wife jokingly thanked those who ever rode with the intensely committed shoer “for still coming,” despite having endured that experience.