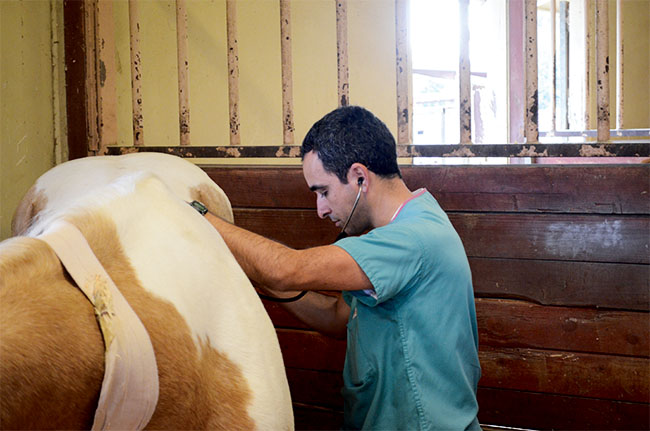 By Pat Tearney posted on March 1, 2015 | Posted in Diseases, Lamenesses

Researchers at the University of California-Davis are preparing to begin a clinical trial of a drug they hope will become an important weapon in fighting the crippling pain that accompanies equine laminitis.

Alonso Guedes, a board-certified veterinary anesthesiologist at the university’s veterinary school, and Bruce Hammock, distinguished professor of entomology, lead the research team. They have been conducting tests on individual horses suffering from laminitis since late 2011. As of the end of 2014, tests had been conducted on several horses.

Results vary, but enough promise has been shown that the team is preparing to go on with a broader field experiment.

The research involves use of a soluble epoxide hydrolase (EH) inhibitor in the treatment of horses suffering from laminitis. The initial case study involved a 4-year-old Thoroughbred mare named Hulahalla, who had been donated to UC-Davis following a racetrack injury.

The mare developed laminitis due to unknown reasons and her pain did not respond to traditional pain medications that included phenylbutazone (Bute) and gabapentin. The experimental drug was introduced as an alternative to euthanasia. The positive effects were fast and clear. She was on her feet and eating within hours. After 5 days of treatment, the laminitis steadily subsided and has not reoccurred.

Guedes explains that EH inhibitors work on one of three branches of a major biochemical pathway. This particular branch is one on which there has been relatively little study compared to the other two branches.

One of those other two…

Laminitis: Research and Recommendations on Management for Horse Owners and Horse Care Professionals