Hard-to-spot condition can result in thin soles and pain

Retracted sole refers to a condition that several equine professionals have observed, but that has not yet been defined or described in any equine medical dictionary.1, 2 There are only a few published or electronic references to retracted soles 3, 4, 5, 6 and to my knowledge, my work is the only source for pictures and radiographs.4, 7

Medically, retraction or retracted is the act of drawing back or a condition of being drawn back.2 The soles of a horse with retracted soles are drawing back or rather up and away from the ground. The soles appear to be being sucked up into the hoof.

During this process, the soles become overly thin, causing the horse to be very sensitive to the slightest sole pressure. Therefore, a good definition for retracted soles may be soles that are thin and abnormally cupped.

The appearance cannot be mistaken for any other sole issue. Instead of having a nice sole concavity, the sole appears to drop off from the white line (Figures 1 and 2). Retracted soles that go unnoticed by a farrier during the trimming process can result in over trimming of the hoof wall, causing the horse extreme pain due to sole pressure. 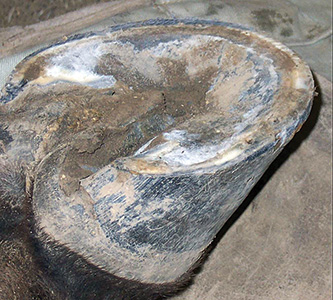 Figure 1. Another example of retracted sole. 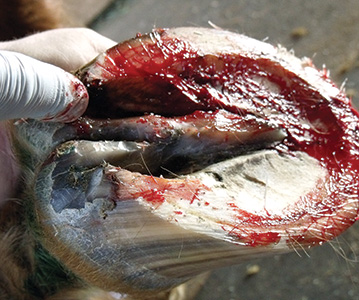 As you can see from the radiograph is Figure 3, if a farrier trims down too much of the hoof wall at the toe, this horse’s already thin sole will be extremely…

Premium content is for our Digital-only and Premium subscribers. A Print-only subscription doesn't qualify. Please purchase/upgrade a subscription with the Digital product to get access to all American Farriers Journal content and archives online.
KEYWORDS over trimming pictures and radiographs recognizing and treating Retracted Soles sensitive to pressure

Retracted Soles an Unfortunate Side Effect of Wet Weather

The Cost Of Treating Laminitis