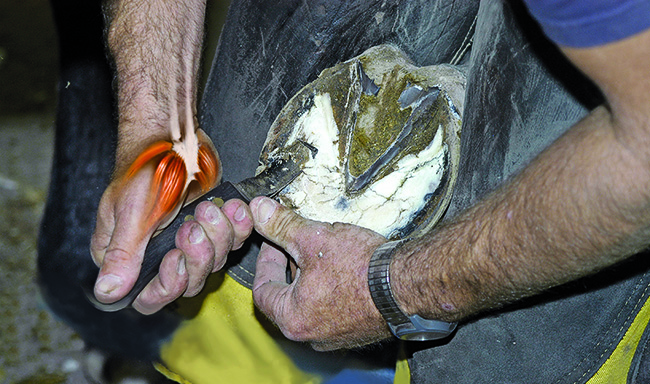 What You're Doing Today Affects Your Health Down the Road

By Lisa Kemp posted on December 1, 2012 | Posted in Safety & Healthcare

Repetitive stresses, poor work habits and small injuries build up over time, creating damage you’re not aware of until it’s too late

Not visualized in the diagram, but located at the wrist, your median nerve supplies feeling and movement to areas of your hand.

Neurosurgeon James Warson, horseman and author of The Rider’s Pain-Free Back, says he’s always mindful of what he refers to as the three basic principles of life.

“Everything goes somewhere, everything is connected to something else and there’s no such thing as a free lunch,” he says, pointing out that even the smallest actions can have long-term consequences when it comes to physiology and well-being over the course of a long hoof-care career.

Warson has had significant experience with farriers and their work. He’s observed and collaborated with many shoers in his horse breeding operations, first growing up on his family’s working cattle ranch in Texas and later in his own Morgan and Saddlebred endeavors with J & J Farms, LLC, of Fairfax, Va., established in 1984. He’s also trimmed and shod a few horses in his day.

When it comes to the physical wear and tear he’s seen in horseshoers, Warson says the most common issues aren’t what you might imagine.

“You’d think the most common would be carpal tunnel syndrome with the amount of hammering, pulling and tugging,” he says. “It’s something I often find in carpenters, but maybe putting a nail into a horse’s hoof isn’t as wearing on the wrist’s median nerve as hammering into lumber day after day.”

“What I do see is a lot of osteoarthritis in the knees. Once…

What To Do When Insects Are Bugging You

How Should You Handle Carpal Tunnel Syndrome?