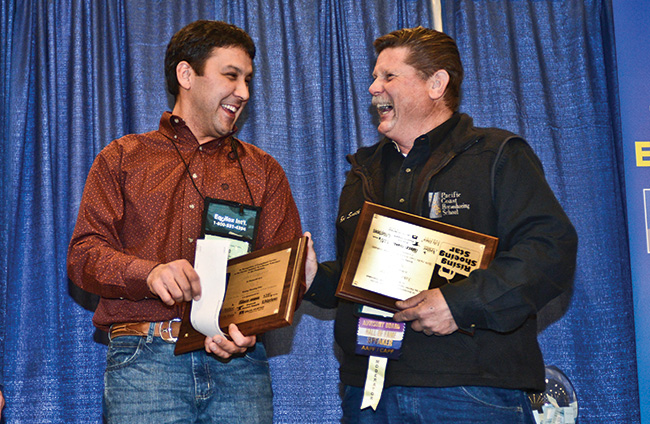 By Frank Lessiter posted on March 1, 2013 | Posted in Business Practices

Three young horseshoers were recognized for outstanding career progress in the equine footcare field during the 10th International Hoof-Care Summit in Cincinnati, Ohio. These individuals were named as Rising Shoeing Stars in a program that promotes the importance of further footcare education while encouraging young shoers to succeed in their careers.

This year’s program honored three up-and-coming farriers who graduated from horseshoeing school in 2009 and have spent the past 3 years establishing their equine footcare careers.

The farriers that were honored during the Summit were Jake Giguere of Smithers, British Columbia; Justin Court of La Grange, Ky.; and Wayne Whitson of Viola, Del. Giguere received a $1,000 check while the other two farriers each received $500 to further their hoof-care education.

The first Canadian to be named as a Rising Shoeing Star in the program’s 5-year history, Giguere is a graduate of the Pacific Coast Horseshoeing School in Plymouth, Calif. He handles the footcare work of more than 300 horses in Northern British Columbia and works closely on therapeutic shoeing concerns with most of the equine veterinarians that are located within 75 miles of his home.

“Jake has accomplished in less than 3 years…