A Frog Can Provide Valuable Information About the Hoof

By Steve Stanley posted on November 18, 2022 | Posted in Anatomy, Trimming

Many of us love to watch our favorite sport. The analyst will laud a supreme athlete who seems to be operating on a different level by saying, “that player really has some hops.” It’s a pity that mainstream media doesn’t recognize the equine athlete with that same regard.

The frog is one of the most important anatomical structures of the horse. A frog helps maintain a fully functioning hoof that is vital to a fully functioning horse. At about 50% moisture content, the frog is easily the highest structure in the hoof capsule for moisture retention. A healthy frog (Figure 1) is almost rubbery in its texture and when a healthy frog exists, most likely a healthy hoof capsule is there as well. 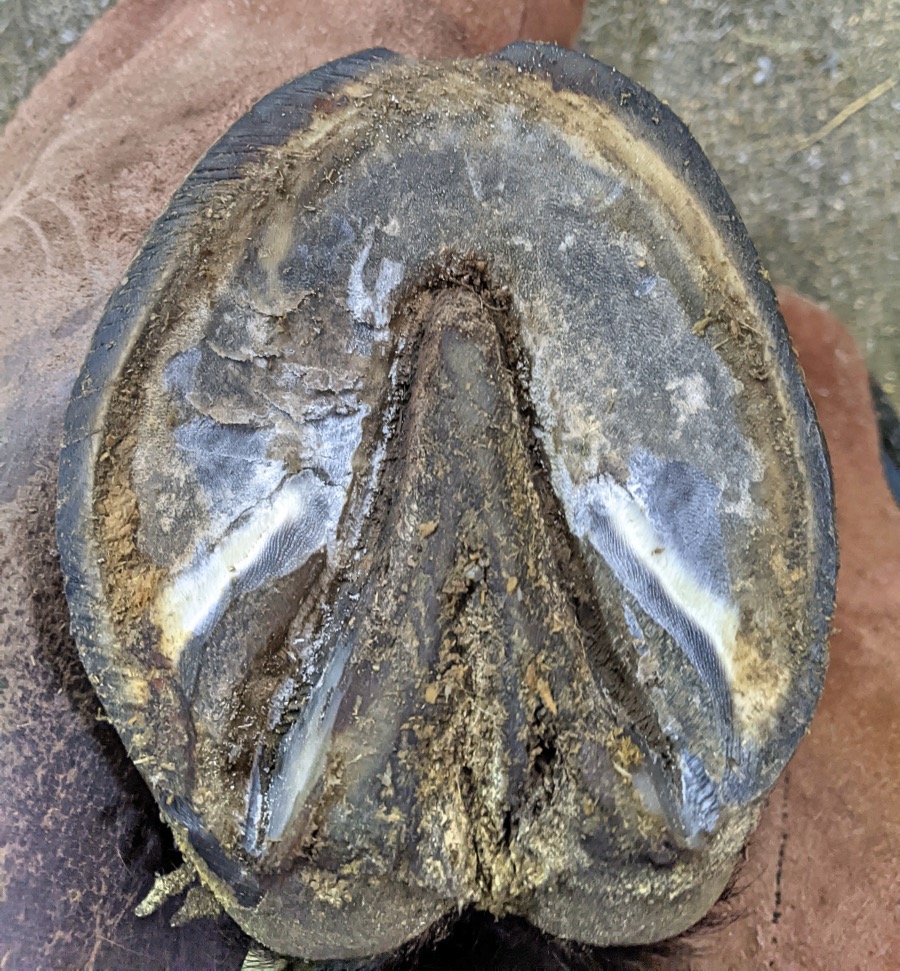 Functions of the frog are many. Traction, support, dissipation of concussion forces and augmented blood flow are all critical functions of the frog. New frog growth is generated from the sensitive frog, just below the visible structure we see when looking at the frog, as it appears in Figure 1. The shape of the frog has a lot to do with the traction effect it has. This creates a much more natural purchase on the track surface than a horseshoe does and is one of the reasons for the enhanced (sometimes) performance results from barefoot racing. 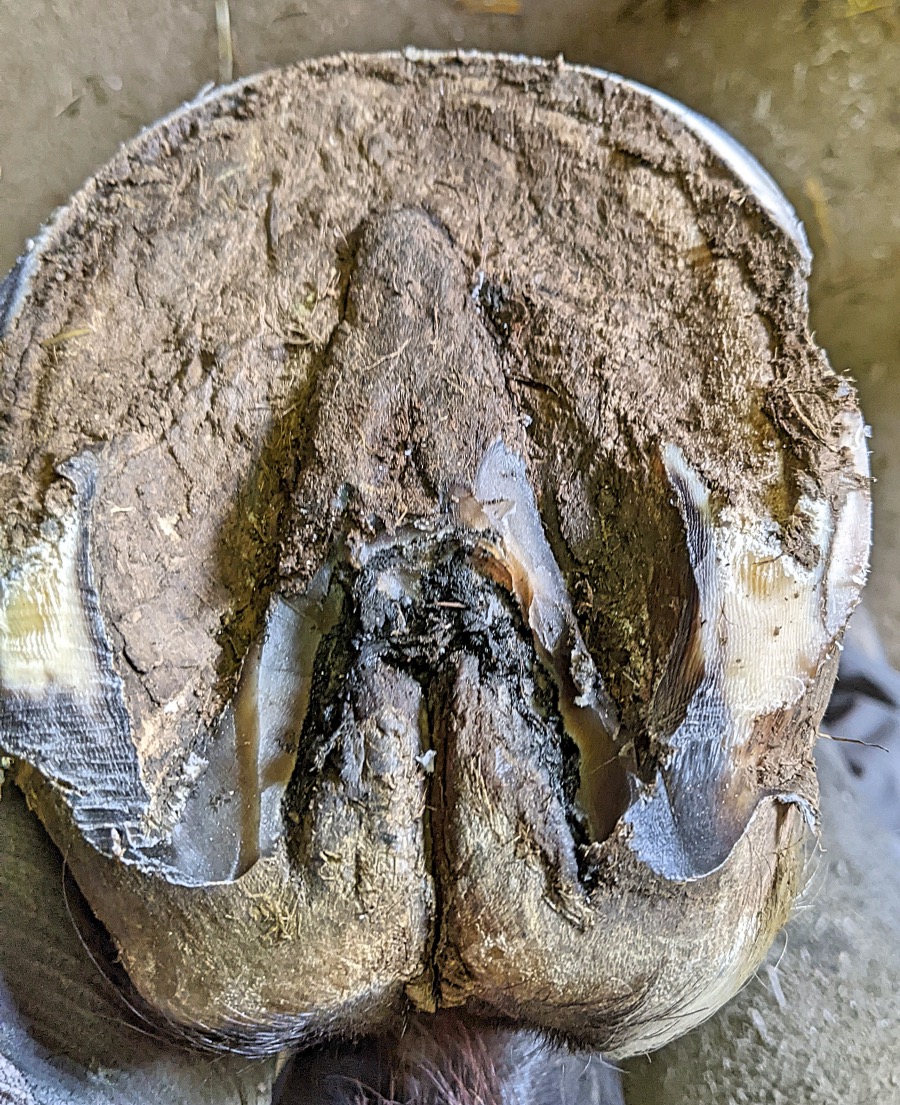 The concussion reducing effect is when the frog engages the ground, compressing the sensitive frog and then, in turn, the digital cushion, which is above the sensitive frog proximally. The digital cushion then broadens into the lateral cartilages of the hoof, expanding the entire structure. The lateral cartilage can be palpated above the coronet band on each side of a hoof. This explains why hoof capsule expansion is more dramatic at the coronet band than it is at the distal border of the hoof wall at the heels where expansion occurs at the bottom of a hoof. A vital key to this reduction of force going up the limb from impact is engagement of the frog and ground. Anything that compromises the frog/ground engagement reduces the cushioning effect from the hoof capsule. Such compromise could occur in many ways. A parameter fit horseshoe that has no frog support will lessen the effectiveness of the frog by elevating the hoof farther from the ground surface. Diseases such as thrush (Figure 2) and canker (Figure 3) will compromise the frog. Thrush is much easier to deal with than canker, which can be devastating to hoof health if not addressed early. 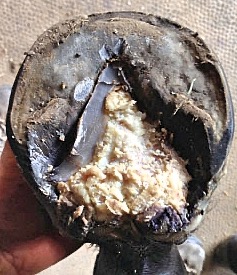 Another detriment to frog function is a sharp hoof knife. The inclination to pretty that frog up by trimming it nice and neat (Figure 4) is not necessary. In fact, it can be the reason for a less functional frog. Dr. Doug Butler, who is one of the most prolific writers and educators in farriery, suggests “only trim enough of the frog for hygiene.” In other words, take no more than needed to maintain a disease and debris free frog. Dr. Ric Redden preaches “don’t filet the frog.” Redden is one of the pioneers in equine veterinary podiatry, at least in this century, since veterinary medicine derives from farriery at its beginnings. Redden was one the first to bring it back. 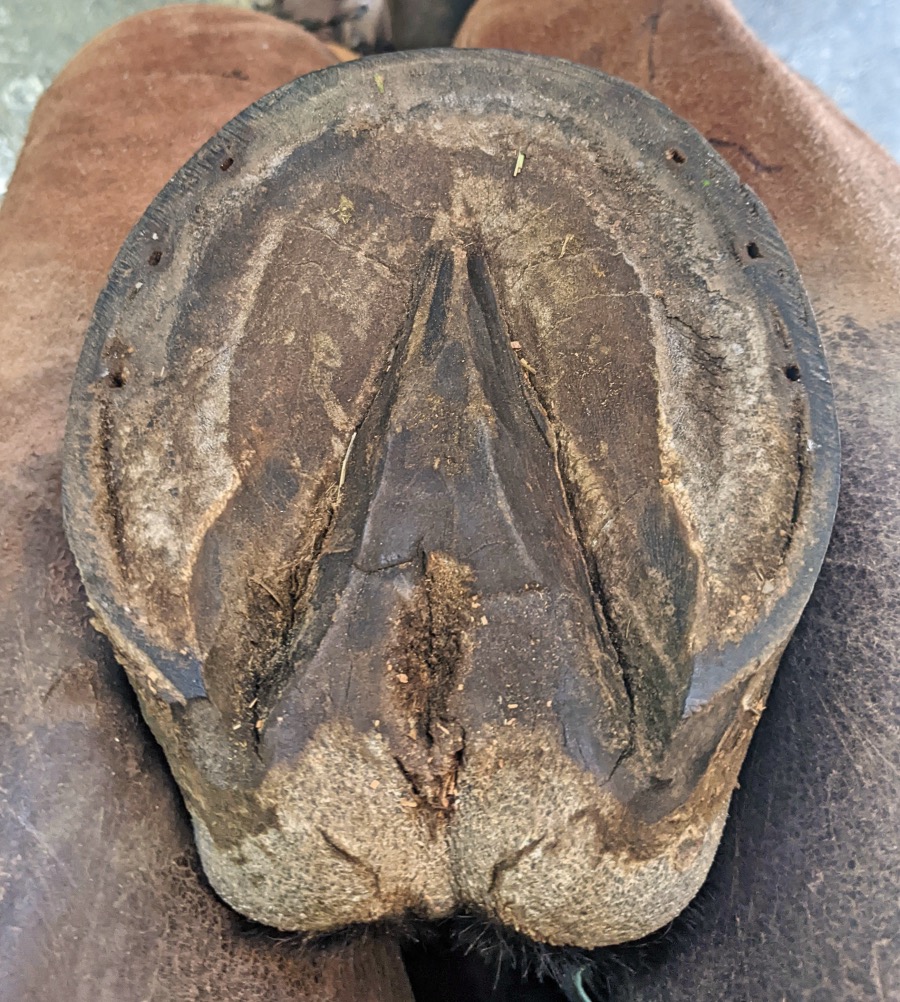 Other indications we can take from the frog are in the case of a prolapsed frog that extends well above the hoof heels, we can assume with reasonable confidence that a negative palmar/plantar angle exists. This is a negative angle relationship between the distal border of the coffin bone and the bottom of the hoof capsule itself. Palmar for front hoof, plantar for rear. This situation has a direct influence on performance and should be addressed when noticed. A recessed frog can be the result of a club foot and is one indication of such a hoof. Disease and trauma are other reasons for a recessed frog. When a hoof with no frog contact strikes the ground, the heels contract when loading instead of expanding. This has obvious implications on hoof soundness.

Protecting and utilizing the frog can absolutely benefit the endeavor for sustained peak performance. Reading the frog will give horsemen valuable information about hoof health.