Maintaining a Healthy Hoof with Conditioners 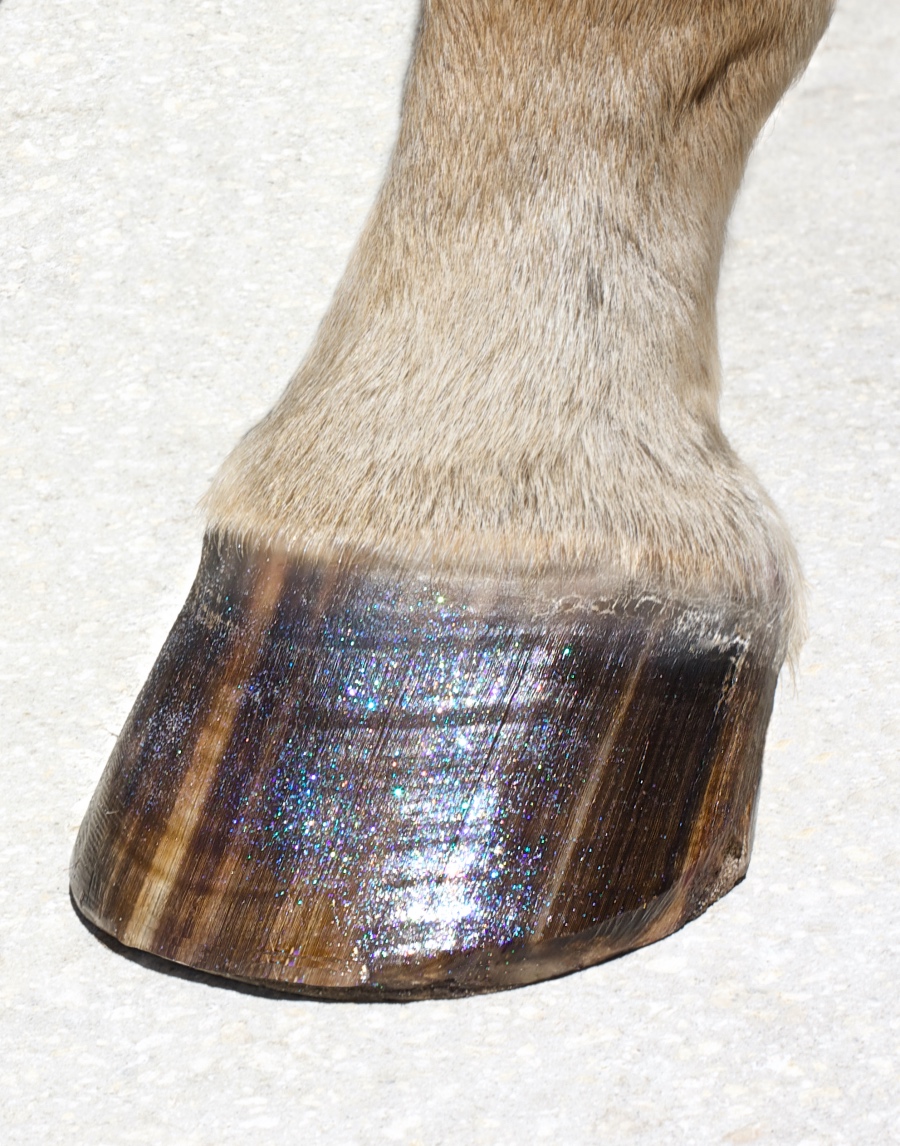 SBS Hoof Researchers have been trying to reinvent the ideal hoof conditioner for decades. Our goal has been more of a process rather than an end game. After 35 years in the hoof care business, these are some of the things we have learned.

The hoof wall is the weight-bearing structure of the hoof, composed of thousands of tiny hollow fibers called tubules. These tubules run vertically from the coronary band and are cemented with a protein substance called keratin. Layer upon layer of these tubules act effectively as springs to absorb tremendous amounts of concussive force while retaining the necessary tensile strength. In general, the elasticity of these tubules and the hoof wall depends on their internal moisture content — 90% comes from the blood and lymph vessels.

This moisture is not simply water but a mix of salts and electrolytes much like that found in an IV solution. Without this essential moisture, the hoof wall would dry up, crack, become brittle and generally fail the job of a leaf spring/shock absorber. Too much moisture, however, can make a hoof too soft and mushy and fail to absorb its concussive load. Therefore, a hoof conditioner’s main function is to maintain the natural moisture balance found within the hoof.

Grandpa and his grandfather before him intuitively used pine tar to help the hoof maintain its natural moisture balance to resist chipping and cracking. Pine tar usually remains fluid (wet), sticky and can attract contaminants instead of repelling them. Their application may be counter-productive because they can serve as a bacterial and fungal growth medium when they fester in a small crack or nail hole. Pine tar, unfortunately, has its drawbacks, but Grandpa was on the right track.

These organic oils work by temporarily sealing in the hoof’s internal moisture to help them maintain their flexibility. The good news is that these organic oils are plentiful and inexpensive. Hoof oils have been used for centuries as a moisturizer.

The downside of using hoof oils is that they usually remain fluid (wet and sticky) after they are applied to the hoof and often attract contaminants instead of repelling them. They also tend to break down quickly when exposed to the environment, especially in wet conditions, and need to be reapplied frequently.

The ability of hoof oils to fight fungus and bacteria is misleading. The trace elements in the oils that may resist bacteria are not intended to benefit surrounding hoof tissue. Their natural function is self-preservation, to benefit the oil’s self life, not the surroundings.

In the mid-1980s, hoof researchers began developing a new class of hoof conditioners made from petroleum derivatives. Urethane polymers, mineral oil and various nail polish formulas containing acetone and formaldehyde solvents have been introduced over the years with limited success. They cure quickly when applied to the hoof, providing a longer-lasting cosmetic shine.

However, synthetic hoof sealants have two significant drawbacks that limit their usefulness. They should be applied only to the hoof wall and not to the bottom of the feet. This is the area where the hoof needs to breathe. Synthetic sealants prevent moisture transpiration. They are helpful to the hoof wall but not to the sole and frog.

Also, synthetic formulas typically contain acetone and other drying agents. They can harm the hoof and the environment when used too frequently. Some farriers still like to use a synthetic coating at the end of each shoeing cycle because of the cosmetic shine they provide as the finishing touch.

A new generation of hoof conditioners has become available in recent years. The thinking now is to treat the entire hoof capsule. The hoof wall, sole and frog all need to function at maximum efficiency to have a healthy hoof condition.

Dual-action hoof conditioners perform two primary functions: they help maintain the natural moisture balance in the hoof for natural flexibility and they treat and protect the hoof against infection. Unlike synthetic sealants, they allow the hoof to breathe as nature intended.

SBS hoof researchers are now using newly developed organic protein emulsions that cure on the hoof to a dry, battle-hardened finish that is long-lasting. These new hoof conditioners also contain a safe broad-spectrum biocide that target harmful bacteria and fungi without harming surrounding hoof tissue that needs to grow out.

Grandpa would have been proud to use these products had the technology existed in his day. Thanks, Grandpa for getting us this far. For product information and more articles on hoof care advancements, please visit SBS Equine.

What is the connection between selenium and a healthy hoof?

What can I do to maintain and support healthy hooves with my two Appaloosa mares?