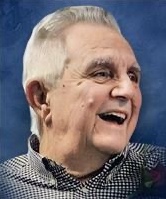 While Kenny managed to steer clear from COVID these last 2 years, in the end, it was his love of ice cream, pie and cookies that his arteries could no longer take.

He graduated from Humansville High School in 1948, and the following year he married Martha Andrews who sadly lost her battle with cancer in 2009. After her passing, he learned to cook. Having perfected cornbread, he declared that Martha was right — if you can read, you can cook.

Morrison began his career operating a milk route and built a dairy herd. He raised cattle as well, but his real love was horses. His expertise with horses led to his involvement with the Missouri Fox Trotting Horse Breed Association (MFTHBA). He was a farrier and he trained and eventually bred Fox Trotters. His stallion, Toddy’s Perfection, was one of the most successful breeding stallions in the industry.

Morrison was known for his honesty and character. Often, customers, who resided from coast to coast, would buy a horse from him just based on his word that this horse was for them. Many of them became lifelong friends. In 1998, he was inducted into the inaugural Hall of Fame class of the MFTHBA.

He served on the Southwest Electric Cooperative Board for more than 3 decades, twice as board president. He was a valued member of the community; he was inducted into the Humansville High School Hall of Fame in 2013. Morris Westfall, former state representative and former state senator, once described him, “… if you were to look in Webster's Dictionary for the definition of a good person of strong character, it would say Kenny Morrison, without a doubt.”

He was a great storyteller. It could be about anything from horses to people, he just loved to retell a tale. His memory was so sharp that he could even recount the weather on that specific day.

Morrison attended the Humansville United Methodist Church for his entire life. In recent times, he was proud to announce that he was the oldest living member of this church.