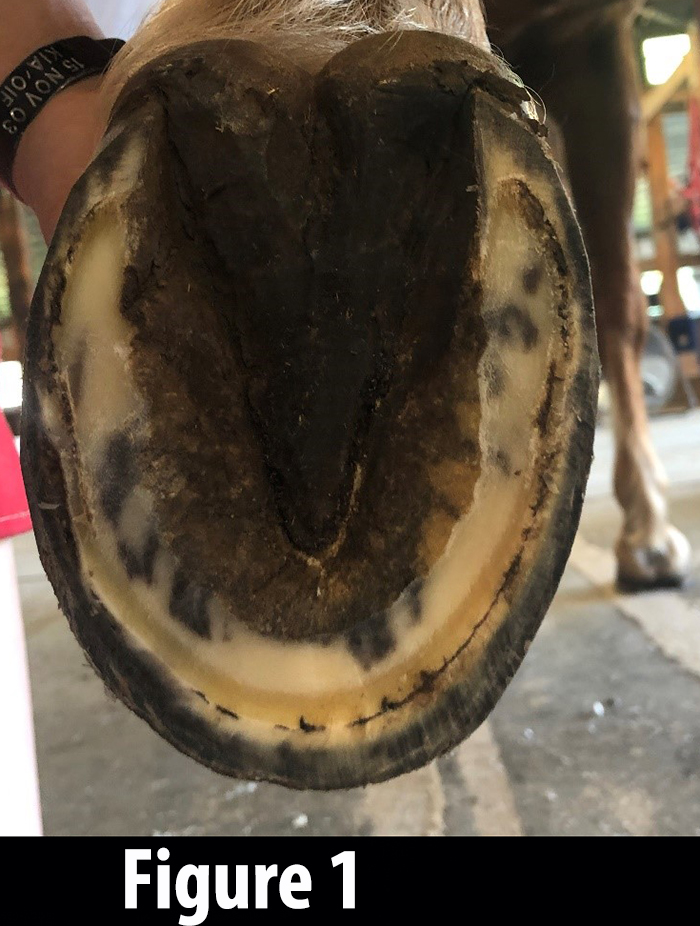 White line infections in horses is caused by opportunist fungi, bacteria, or a combination of both that break down and destroy the tissue connection within the hoof [1,2]. Treatment has traditionally been to remove the affected area of the white line and treat with some form of antimicrobial topical [3,4]. In personal conversations, equine professionals have stated that horse owner compliance at applying daily topicals to combat white line infections is short lived. The effectiveness of daily topicals also comes into question once a horseshoe is applied to the hoof. Traditional horseshoes made of steel and aluminum provide no antibacterial qualities [5,6]. The application of U.S. Environmental Protection Agency (EPA) [a] approved copper-alloy horseshoes have been shown in studies to help with combating bacterial and fungal infections of the white line and eliminate the need for horse owners to apply daily topicals [7,8].

Copper is man's oldest metal, dating back more than 10,000 years [6]. Its antimicrobial properties are becoming increasingly important to the prevention of infections [6,9]. Copper and copper alloys have been used for thousands of years to kill bacteria and can commonly be found in hospitals to minimize the spread of bacterial and fungal diseases [6,9,10].

The EPA has acknowledged and tested over 500 copper alloys. Copper is the only metal whose antimicrobial properties have been certified by the EPA [6,9,10]. Laboratory testing has shown that copper-alloy has continuous and ongoing antibacterial action killing greater than 99.9% of bacteria within 2 hours [9,10,11,12]. 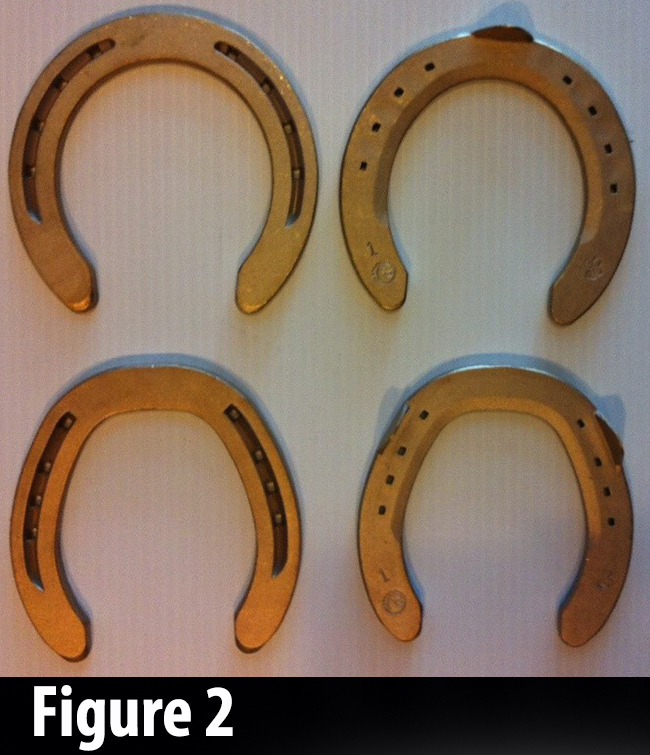 horseshoe company¬¬ [b] (Figure 1) with Codelco copper [c] [13,14]. The aim of this study was to use horses who have habitual white line infections and only apply the Kawell copper-alloy horseshoes for the treatment of these issues, in order to see what qualitative difference can be observed over three (3), six ¬¬¬(6) week trimming and shoeing cycles. The results found that a significant amount of horses had a positive qualitative difference in the improvement of their white lines.

Study design Seven currently active riding horses (western, dressage and jumping) from the Meredith Manor International Equestrian Centre located in Waverly, WV [d] were used for the study. There were no changes in riding, stalling or diet for any of the study horses. Study horses were chosen for having habitual white line infection issues by the Meredith Manor farrier instructor. All horses before the study were being treated daily with a thrush medication and this practice was halted on day one of the study.

Horses were trimmed and shod by the same Meredith Manor farrier students. In phase one of the study, all seven horses had their steel shoes removed, trimmed, photos taken, data collected and shod with Kawell [a] copper-alloy horseshoes (test shoes) (Figure 1). Any modifications needing to be done were done following the manufacturers recommendations [15,16]. The manufacturer states that the shoes can be worked either cold or hot. When shaped cold, they should work like steel shoes, with a bit more spring when hit with the hammer. When shaped hot, they should be treated like aluminum and not heated more than 900 degre 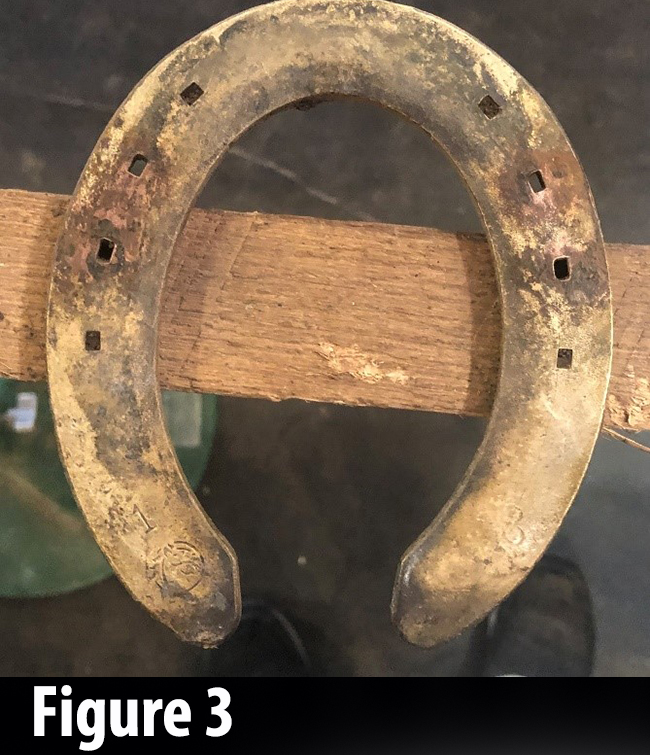 After each of the study horses’ foot were trimmed, photos were taken with an I-Phone 10 (Figure 2) and the feet were scored by the farrier student trimming the study horse by using the visual white line involvement form (Table 1).  Each score was validated and documented by the author.  The amount of white line involvement was scored using a percentage of the total amount of white line infected.  Due to the fact that copper-alloy leaches copper salts onto the foot and creates a discoloration (Figures 3 and 4), a pen nib (tip of a ball point pen) was used to probe the white line to confirm involvement of infected, seedy, non-firm white lines compared to uninfected firm white lines. 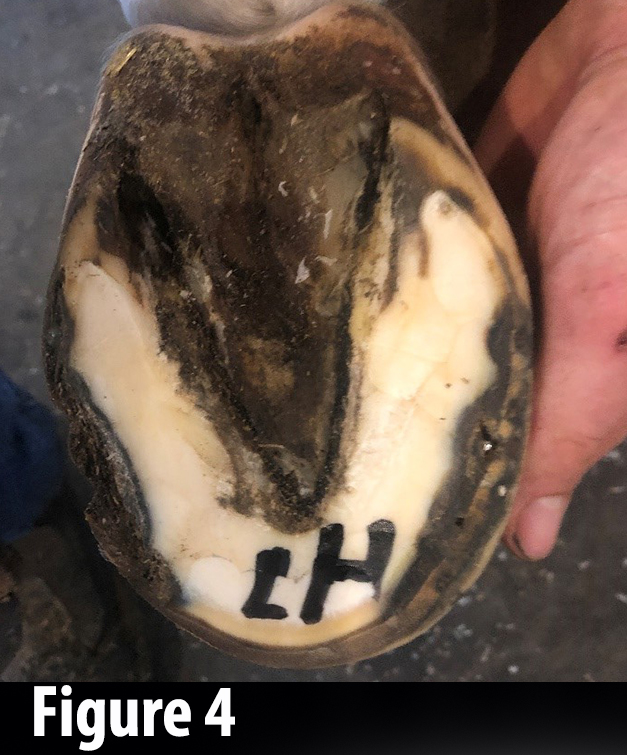 The data for phase one (beginning of study data) compared to phase three (end of study data) was examined using a one-way ANOVA, Minitab Descriptive Statistics and the Shapiro-Wilk test.