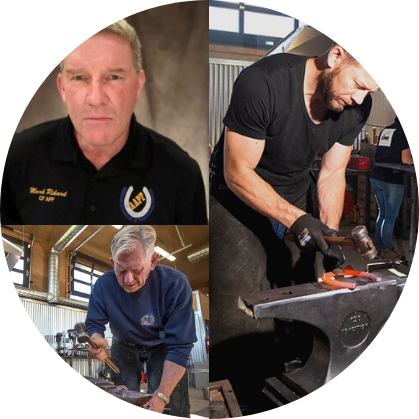 Join American Farriers Journal April 24-26 for the first Performance Horse Hoof-Care Classroom focused on hunters and jumpers. This 100% free-to-attend online educational event will feature 8 on-demand video presentations attendees can watch online on their own schedule, during these 3 days.

The Performance Horse Hoof-Care Classroom offers practical information about shoeing for different surfaces, managing common pathologies of hunters/jumpers, competition judging and how it relates back to farriery, and advice from leading professionals in the hunter/jumper field.

Are they hunters or are they jumpers? The terms are often used interchangeably. But what does it mean to be a hunter vs. a jumper. During a special panel session, "Regional Differences in Shoeing Hunters/Jumpers," Birmingham, Ala., farrier Mark Rikard will clear up the confusion around the terminolgy and discusses the considerations he weighs when shoeing hunters in a wet climate.

Lance Sloman started being the head show farrier at Spruce Meadows in 1983. He recently passed the mantle on to his son Connor. Also during this thought-provoking panel, the Slomans share what they have learned over the years shoeing hunters and jumpers on the grass turf at Spruce Meadows.

About Mark Rikard: Mark Rikard, CF, APF graduated from Auburn University with a bachelor's degree in Graphic Art and Design and worked in the advertising industry, textiles and was even a political cartoonist all for a period of seven years before returning to his original passion...horses. Rikard has been a practicing farrier now for 25 years and is based in Birmingham, Alabama.

Rikard started his career with horses guiding trail rides at guest ranches but has since either worked or ridden in a number of different disciplines which include team penning, team roping, exercise rider as well as hunters and jumpers.

Today, Rikard's clientele is based primarily in the hunter/jumper world with a few eventers, dressage horses and backyard ponies thrown into the mix.

About Lance and Connor Sloman: Lance Sloman, APF, CJF attended Oklahoma Farriers College/Bud Beaston Horseshoeing School in 1976. In 1982, he founded Equiterra Farrier Services in Calgary, Alberta, Canada. He has served as a president of the Western Canadian Farriers Association (1990) as well as on the board of regional directors for the American Farrier’s Association. He has over 40 years’ experience in the horseshoeing business and he has been a pillar at Spruce Meadows since it's very beginnings.

Connor Sloman, APF-I started his career in 2001 when he began working and apprenticing under his father Lance Sloman. Connor has now taken on the responsibilities of running Equiterra.

Together Connor and Lance specialize in shoeing for hunter and jumper clients, both at home and on the road, while still serving other disciplines and therapeutic cases on occasion.

In addition to their regular day to day operations, they are charged with providing hoof care for competitors at all five CSI 5* show jumping tournaments held each year at Spruce Meadows.

To learn more about this and other Hunter/Jumper Performance Horse Hoof-Care Classroom presentations, and to register for this free online educational event, visit www.Americanfarriers.com/Performance.