He'd introduce himself as a horseshoer, but his musical achievements are just as impressive

Doug Figgs has to stretch in the morning. It helps loosen him up for a full day of shoeing horses. Or maybe for a day tending to his cattle. Possibly for a day of traveling capped off with an evening performance. Regardless, there’s a big day ahead.

Every day is a big day for the Lemitar, N.M., certified journeyman farrier who’s also an award-winning singer/songwriter. Shoeing by day and working on his music at night, with the occasional weekend trip to perform, Figgs has his groove. “It’s a nice way to do it,” he says. “I’m really happy.”

Farriery and music might seem like an odd combination, but Figgs came naturally to both of them.

Growing up, his father’s job as a mechanic took his family all around, never allowing them to settle down and have the chance to own horses, which Figgs always wanted. So, the moment he was able to, he did. And of course, he had to properly shoe them, something he just sort of figured out.

From there, he would shoe horses for friends in the area before going to trade school, learning more and more from his mentor Jim Keith. That was in 1993, 10 years later he earned his journeyman farrier certification from the American Farrier’s Association. To him, that title came from spending years around other farriers who were better than him, learning from them and raising his skill level.

In that way, he approaches his music career similarly.

“Working with people who are better than you is really good,” he says. “Your level of performance goes up, no matter what you’re doing.”

While Figgs frequently collaborates, whether it’s on songwriting for a solo album or in his trio The Cowboy Way, which features his musical mentor Mariam Funke, and finds that sort of communal aspect of his work to be the roots of one big family. That greatly influences his authenticity in songwriting. “When you’re writing songs, you’re putting yourself out there,” he says. 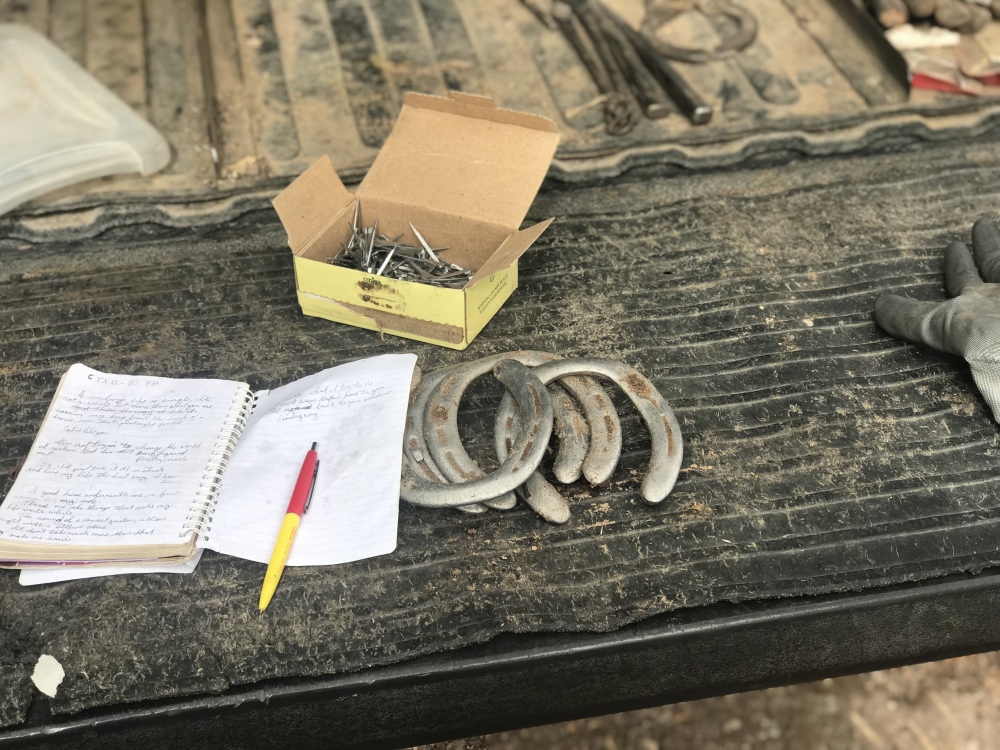 Sometimes, the inspiration for those songs hit at his most authentic moments.

“Most of my best songs were written on the tailgate of my truck while shoeing horses,” he says.

Figgs carries around a pen and a couple of notepads, mostly filled, with his tools in case inspiration strikes. He’ll take a moment in between horses to write, because he’s become so comfortable with the process of shoeing that he can workshop song ideas in his head, too.

Most of those songs are influenced by the western lifestyle and the cowboy history of the region, which Figgs has always been drawn to. His earliest musical influences were acts such as The Marshall Tucker Band that romanticized the lifestyle. Figgs has doubled-down and made it his own.

And like with farriery, Figgs has experienced tremendous success with music. In 2018 alone, he was awarded Male Performer of the Year and Group of the Year by the International Western Music Association, and best country CD for his album “… thinkin’ of you” by the New Mexico Music Awards. He’s raked in multiple awards each year dating back to 2014.

And despite all of his success, Figgs still considers himself a horseshoer first.

You can read more about Figgs and purchase his music at his website, DougFiggs.com.

Connor Lagore is a graduate of the University of Missouri and an intern at American Farriers Journal.