Farriers aren’t seen as the horse wranglers that they once were in the Wild West — gruff men who tackled horses, five o’clock shadows and calloused hands. There’s a changing trend of horseshoeing being seen as a “caregiving role,” says Bob Smith, founder of Pacific Coast Horseshoeing School (PCHS) in Plymouth, Calif. More women are gravitating to this trade due to the appeal of helping horses and the freedom that comes with it. This change is being reflected in the classes shoeing schools have been admitting. PCHS recently began teaching the first all-women farrier class it has seen in its 30-year history, not long after Cornell University admitted its first all-women class as well.

After the Vietnam War, Smith wanted to go to law school. However, schooling was expensive, and he needed some way to pay for the courses, so he went to Porterville Horseshoeing School where he fell in love with the craft and the freedom it offered. It’s one of the perks that women like about the career as well — freedom, Smith says.

In 1991 when Smith opened his school, he says about 1 in 100 calls inquiring about the course were from women. Now those numbers have changed. About 1 in 15-20 calls is a woman asking for more information. Now, after almost 30 years, PCHS has an all-women class.

“Farriers are more like a member of a caregiving team who must be knowledgeable in many aspects of the horse, not just its feet,” says Smith. “Owners no longer think of horses as livestock but more in the companion animal status, which requires a different type of handling and verbiage.” Women are often viewed as having a nurturing approach, but that doesn’t mean they can’t be tough. Being a farrier is hard work, but it’s rewarding.

Compared to other trade schools, farrier schools typically have shorter training periods. Smith’s school offers an 8-week intensive course, whereas other degree and career paths can take years. However, many student farriers enter formal schooling programs with some knowledge of the equine industry. 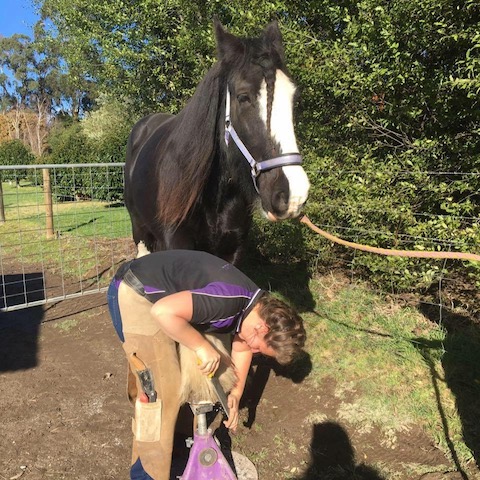 Kathryn Christieson, a student in Smith’s class, has had horses since she was a teenager. After volunteering with the Riding for the Disabled Assn. (RDA), she begged her parents for a horse.

With initial plans of becoming a vet, Christieson was drawn to farriery and the equine distal limb. “I realized just how much I love helping solve equine lameness. And, while being a vet would let me do that, as a farrier I could make this my primary focus,” she says. “After all, ‘no hoof, no horse’.”

Her farrier had also been a woman, Sarah Kuyken. For Christieson's 21st birthday, she received a clinic with Parkesburg, Pa., farrier Daisy Bicking.

“I was fortunate to always have women in farriery around me, and I think with the number of women now training to be in the field, it’s going to become more and more common for the next generation to have these role models to look up to,” says Christieson.

Ellese Casteel, another student in Smith’s class, didn’t start out with horses right away. It wasn’t until her early 20s that she became entangled in the horse world through trail riding, riding lessons and working at a barn in Kodiak, Alaska.

“As I met more horse owners, a frequent complaint from them would be the complete lack of farriers in the area and Alaska in general,” says Casteel. With the demand much higher than the supply of farriers, the seed was planted. A few years later when her parents bought a few horses in Iowa, Casteel went to visit while the farrier was there.

“He gets to work for himself,” she says. “And I was like, I could do that.” Being your own boss is a high selling point for many people who join the industry, not just women.

It took a few years of researching the right school and saving money before she became one of Smith’s students at PCHS. Smith’s credentials and the quality of the school’s graduates influenced her decision to ultimately attend school there. Sam Gubera is a graduate of PCHS and went on to apprentice under Steve Wiberg.

When asked about her least favorite thing about shoeing, she mentioned the occasional slag burn, but added that, overall, it’s been a great experience for her.

“I really hope to see this trend continue with women farriers,” Casteel says. “I only knew of one before I came to the school. I believe in leading by example.”

Although Smith believes this all-women class to be a fluke, he also believes the percentage of women farriers may increase over the years.