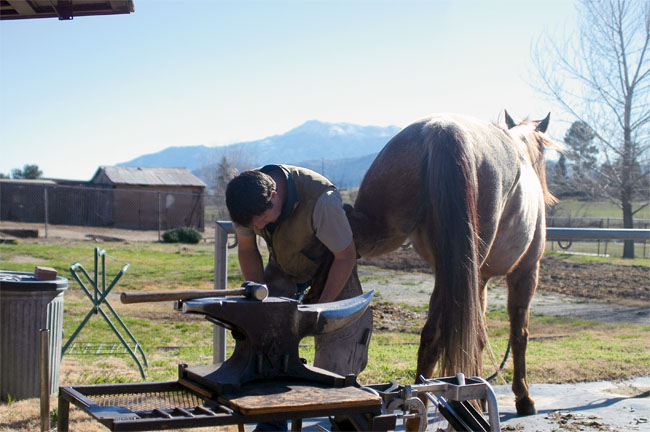 By Pat Tearney posted on March 1, 2008 | Posted in Clients, Shoeing

The snow-capped peaks of the San Bernardino Mountains loom in the background as Portor Green works on the hind foot of a horse in Southern California. Green does almost all of his shoeing within 50 miles of his Yucaipa, Calif., home.

The sun is already above the San Bernardino Mountains in Southern California as Portor Green gets on the road and heads for his first shoeing stop of the day. The traffic inbound on I-10 toward Los Angeles is gnarled and crawling in all four lanes as Californians get their daily dose of highway gridlock along with their morning coffee.

But Green takes the ramp leading to the outbound lanes, away from Los Angeles and is soon cruising at the kind of speeds freeways were designed for.

“I like to manage my day so I’m not going in the same direction most people are,” says Green. “It makes things go a lot smoother.”

That’s also indicative of how Green approaches his horseshoeing business. He makes sure he’s running it, rather than letting it run him.

“I do almost all of my shoeing within a 50-mile circle around my home,” he explains. “There are plenty of days when I don’t drive on the freeway at all.”

Prior to starting his shoeing day, Green dropped one of his four children off at school, and then stopped by his father’s shoeing supply store. Portor is the son of Lee Green, a member of the International Horseshoeing Hall Of Fame and owner of The…

Shoeing is His Business, Polo Ponies His Passion