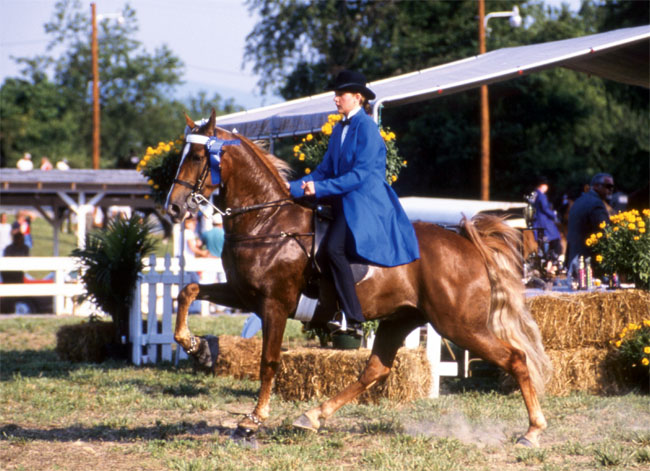 By Frank Lessiter posted on July 1, 2008 | Posted in Disciplines & Breeds

Illegal or not, some still resort to this abusive and unethical method to enhance gaited horse animation and gain an edge in the show ring

Robert Blackwell was a racetrack shoer until he got tired of the travel and decided to venture into other areas of footcare.

“I was looking to find other horses to do and one day did a Tennessee Walking Horse (TWH),” says the Seymour, Mo., farrier. “After examining a front foot and putting it back down, I was left with a handful of hair in my hand. I didn’t know anything about chemical soring at the time, but I quickly realized that I didn’t want any part of whatever it was.”

Donna Benefield placed a TWH with a leading trainer a number of years ago. When the California filmmaker later visited the barn, realized the trainer had to beat the horse to get him out of the stall and saw a dried-up blister on the leg, she moved the horse to another trainer’s barn.

That was Benefield’s introduction to soring — the illegal injuring of a horse’s foot or leg in an attempt to use pain to promote hoof action that judges look for in gaited horse competitions.

It also marked her joining the campaign to end the practice, a crusade she’s still involved with as administrative director of the Horse Protection Commission. She also helped provide evidence that an unsored horse can win one of the big events when one of her horses captured a TWH world championship in 1982.

There are many ways to sore horses, with the tricks often being as closely guarded as Aunt…