By Jeremy McGovern posted on March 7, 2018
Pictured Above: Young during the team trials. Photo: Blackmore-Heal Media

Changing times was the theme following the British team trials back in January. First, longtime team manager Nigel Fennel stepped down, with Danny Elliot taking the position. There also was a changeover of members of the British senior team. However, perhaps the most noteworthy change came from the British apprentice team.

Harriet Young made the British Apprentice Farrier Team during the combined team trials at Warwickshire Farriery College in Moreton Morrell. By doing so, Young became the first woman to make either team. Young also placed first as the Apprentice Trials Champion. 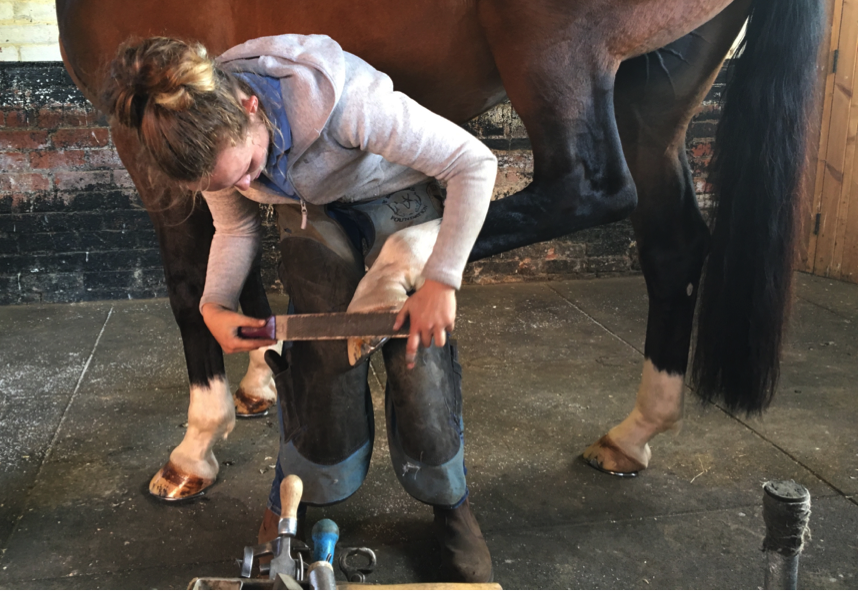 Young finishing a foot in September 2017.

In the apprentice competition, contestants had one class to make three shoes in a 70-minute time frame. The shoes included a sidebone bar shoe; a concave, onion-heel front; and plain stamp lateral extension hind with a toe clip. The shoe list was released 6 weeks prior to competition.

Young says the trials provided a tough challenge, especially after taking 3 months off in 2017 due to a broken arm. She credits several things that helped her prior to the contest.

“I worked with different farriers leading up, which helped me to watch how they made each shoe,” she notes. “Then I spent a lot of time practicing each shoe individually before working them all together. Discussing the shoes also was a great help. This helped me go through my head how I might make each shoe.”

Young says there are elements of the trials’ shoes that transfer to her everyday work, so there was plenty “on-the-job” practice. “Fitting these to the feet helped me understand the shoes better,” she adds. “And making the shoes helped me better understand how they will affect the foot and horse.

“I didn’t think of it as competition, but as another practice. I stuck to my time frames from the start of the contest, and measured where I needed to be with certain steps complete by 10 minutes and so on. I wanted to be strict, operate within my own bubble and crack on.”

Young finishes her 4.5-year apprenticeship in about 9 months. She has been working with Jonathan Nunn since June 1, 2017, after working under another farrier at the start of her apprenticeship.

Young and the others who made the British Apprentice Team following the team trials. Photo: Carl White

Young and the other apprentices will make their first competition appearance at the Home Internationals in mid-April.