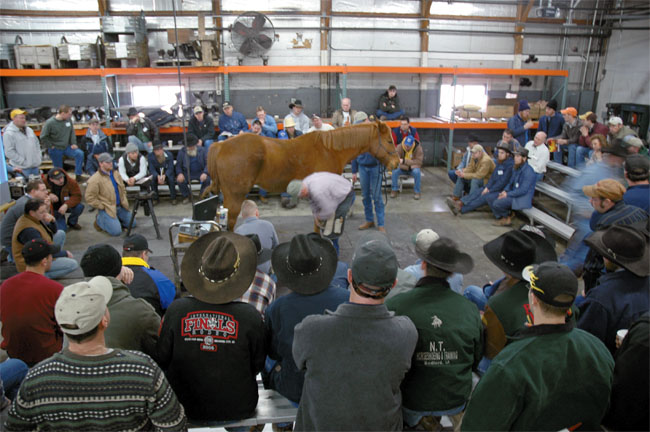 By Ron Perszewski posted on May 1, 2008 | Posted in Education, Trimming

A crowd of farriers was on hand at a clinic at Anvil Brand to learn from Hall Of Fame horseshoer Jim Keith, who has unusual views on hoof balance.

“It’s called horseshoeing, not footshoeing,” says Jim Keith, explaining why he rejects the traditional approach of aligning the hoof-pastern axis as the starting point for bringing a hoof into balance.

Keith of Tucumcari, N.M., a member of the International Horseshoeing Hall Of Fame and a former, two-time American Farrier’s Association Educator of the Year, notes that there are widely varying opinions about what proper balance really is, which leaves many farriers confused and unsure about what’s right.

Appearing as the instructor at a recent shoeing clinic staged by Anvil Brand in Lexington, Ill., Keith said that rather than focusing on the pastern alignment, farriers should look at the whole horse and then trim the hooves to help the horse “stand on” its feet, placing the horse’s center of gravity directly over the hooves. By this method, a plumb line dropped from the horse’s shoulder would exit the hoof at the breakover point, he explains.

But if his idea of balance stops there, he concedes, “Basically, every horse standing up is in balance.” So, Keith extends his definition of balance to include hoof care that “creates the least need for compensation” by the hoof to accommodate the horse’s activities.

“Horses compensate for everything that happens to them,” Keith says. He adds, “Compensation — I’ve been using that term for…

The Ideal Hoof Angle Depends On The Horse

Balancing The Hoof My Way