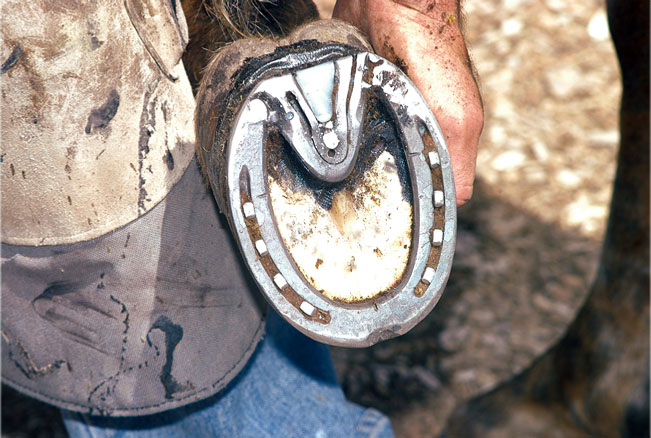 By Christy West posted on September 1, 2008 | Posted in Diseases

Heart bar shoes and other shoeing and trimming methods are likely to remain the main weapon in the fight against laminitis for some time, but new avenues of research offer hopes of exciting new therapies — although some probably won’t be available until the distant future.

What if one day, you could treat laminitis with syringes along with — or even instead of — shoes? Or even plain old oxygen? Before you string me up from the nearest tree for even uttering such blasphemy, let me just say this: Researchers are already working on developing therapies with the potential to allow for just that.

But don’t plan to throw out your tools and shoes anytime soon. These therapies are barely conceived yet, at least with respect to laminitis. But they do have potential. At the fourth International Equine Conference on Laminitis and Diseases of the Foot, held Nov. 2 to 4, 2007, in Palm Beach, Fla., researchers discussed the possibilities of treating laminitis with stem cell therapy, gene therapy, interleukin-1 receptor antagonist protein (IRAP), hyperbaric oxygen therapy and diagnosing it with proteomics.

Stem cell therapy is “often portrayed as somewhat of a miracle cure for a variety of diseases,” noted Lisa Fortier, DVM, PhD, Dipl. ACVS, associate professor of clinical sciences at Cornell University. “However, stem cells aren’t yet living up to the hype.”

Stem cells sound fantastic; who wouldn’t love a therapy that can be used to treat almost anything? These cells have the theoretical potential…