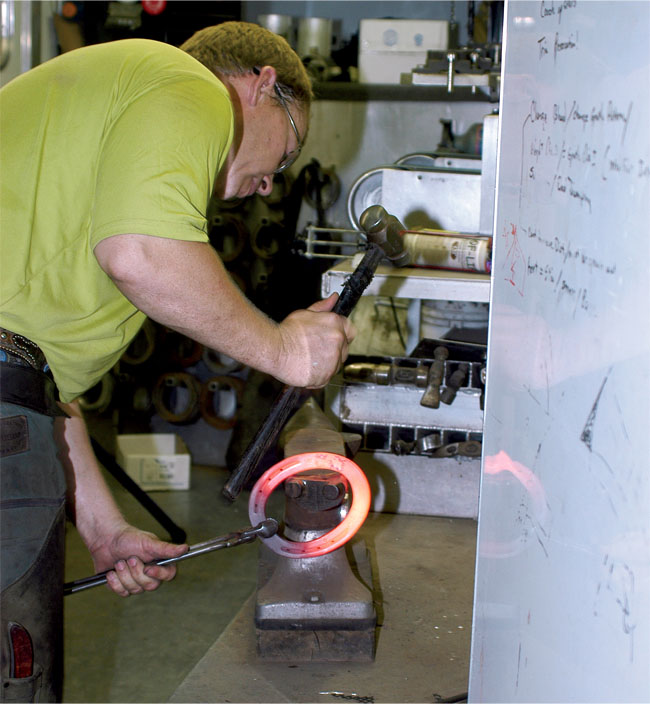 By Pat Tearney posted on September 1, 2008 | Posted in Shoeing

Maryland farrier Doug Anderson shapes a shoe. Anderson has been shoeing for 10 years and says his hoof care philosophy relies on the twin foundations of aligning the bony column and improving blood flow to the hoof through balance.

The foundation of hoof care for farrier Doug Anderson comes down to something that sounds like it could be the name of a pirate or horror movie — Blood and Bones.

“I’ve been shoeing for 10 years now and what I’ve learned is that it all comes down to blood and bones,” says Anderson, who shoes out of Mount Airy, Md. “If I align the bony column and ensure that there’s good blood circulation in the foot through proper balance, just about everything else takes care of itself.”

8:38 a.m. Anderson will spend this day of “Shoeing For A Living” near his Maryland home, but he’s pretty mobile. During the Florida show season, he drives down to Wellington every three weeks to take care of his clients there, and also has a shoeing shop in Texas where he works at other times of the year.

Anderson started his shoeing career later than many farriers. While he’d grown up around horses and had learned to trim the feet of horses he owned, his earlier career was in the jewelry trade. He’s a certified gemologist and worked as a diamond buyer around the Pacific Rim as well as in Europe…

Life After Shoeing and a Spinal Cord Injury