Remembering a World War I Farrier

As we pause on Memorial Day to honor the many men and women who paid the ultimate price to preserve freedom in the United States, there was a time when farriers served a crucial role in the service of this country.

The Newark Advocate recently spotlighted World War I farrier Clark Mazey. Mazey enlisted in the U.S. Army on July 29, 1918, bringing a special set of skills with him — hoof-care expertise.

Before his enlistment, Mazey graduated from Newark High School and worked with his brother Thomas. Both of the Mazey brothers were farriers.

Farriers were fundamental to the Army’s day-to-day function during World War I, when horses were the primary mode of transportation for necessary supplies and the normalization of tanks — let alone military aircraft — was yet to come.

At the end of September 1918, Mazey was sent to France as part of the Fourth Casual Company of Engineers. The work, however crucial, was not safe. Within a month of working in the conditions of war, he became ill, passing away from spinal meningitis in Brest, France. Mazey died Nov. 5 at 22-years-old, only 6 days before the armistice that would end the war. 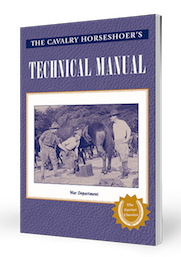 Veteran Army farriers say that The Cavalry Horseshoer’s Technical Manual, a 128-page War Department technical manual (TM-220), offers the best instructions on shoeing techniques to be found anywhere and is among the very best shoeing books ever written. Jammed with hundreds of practical shoeing ideas that have stood the test of time, you'll return to it time and again for its practical, straightforward and proven principles that offer just as much value to today's farrier as the last three generations of farriers whose skill and expertise were heavily influenced by this timeless manual. Pick up your copy of this book today and save 30%. Enter code CAVALRY at checkout.

I’ve got a mare my farrier thinks may be suffering from equine metabolic syndrome. What is it and how do I manage it?