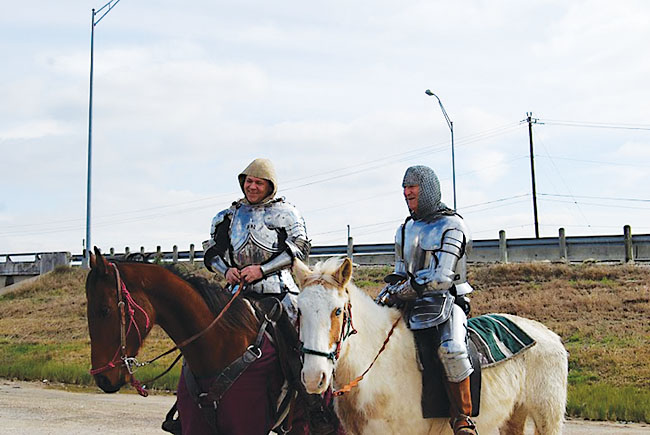 Knights errant Bill Underwood and his son, also named Bill, are embarking on a 5,000-mile quest from Texas to New York and back to raise funds to fight cancer. They are looking for farriers to donate hoof-care work along their route.

Wearing full medieval armor, Bill Underwood and his son, also named Bill, will ride horseback across the United States, staging fund-raisers for cancer research. The Underwoods know the ride will be as trying on their horses as it will on them, and are looking for farriers to donate shoeing services along the route.

The knights will pay for any horseshoes needed during the ride. “But we would greatly appreciate it if a few generous farriers would donate a bit of their time and expertise. They would be contributing directly to the success of the fight against cancer,” says the elder Bill Underwood of Hitchcock, Texas. The younger Bill lives in New Orleans.

The ride will begin in Galveston, Texas, on May 8, and head to New York City, then southwest to Los Angeles and finally back to Galveston. Farriers will be needed to check and possibly shoe the hooves at the numerous stops.

“He’s a big old softy that allows my 2-year-old granddaughter to swing on his tail,” Underwood says. The other is a 5-year-old registered Thoroughbred named Tupelo, He stands 17 hands high and weighs 1,500 pounds. “He’s a little…