Practices What He Preaches

By Katherine Meitner posted on December 1, 2000 | Posted in Shoeing

Several times a year, this shoer is called upon to decide who's capable of being certified as a farrier. The rest of the time, he practices what he preaches while delivering the best care to his clients’ horses

The AFA examiner conjures up a feeling that seems to demand respect, doesn’t it?

I spent the day with Wally Johnson of Issaquah, Wash., for this issue’s “Shoeing For A Living” article.

Johnson is among 20 American Farrier’s Association (AFA) examiners. One day with him will prove that being an AFA examiner requires strength, a keen mind and plenty of practical shoeing skill.

Here’s how our day went.

8:30 a.m. Johnson picks me up at Denny’s restaurant in Issaquah. His truck isn’t as reliable as he is, since the battery conked out this morning, sending Johnson all over the city trying to get it fixed and eventually replacing it.

Johnson says we’ll have to get a “move on” if we’re going to make up for the lost time.

8:42 a.m. On the way to our first stop, Johnson explains how he came to the Pacific Northwest.

“I’m originally from California,” he explains. “In 1973, I started shoeing in Illinois where I learned the trade. I moved here in 1980. It seemed to be a horseshoer’s paradise. Horses were everywhere and the weather was great, so we moved.” 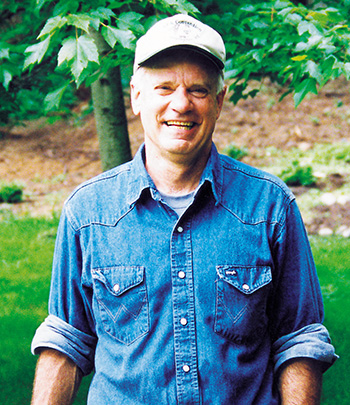 Johnson has a reputation for not being very talkative. He’s more of a thinker, not letting a single word leave his mouth without first thinking about it.

8:50 a.m. We arrive at the first stop to handle a backyard pleasure horse. After backing his truck up to the…