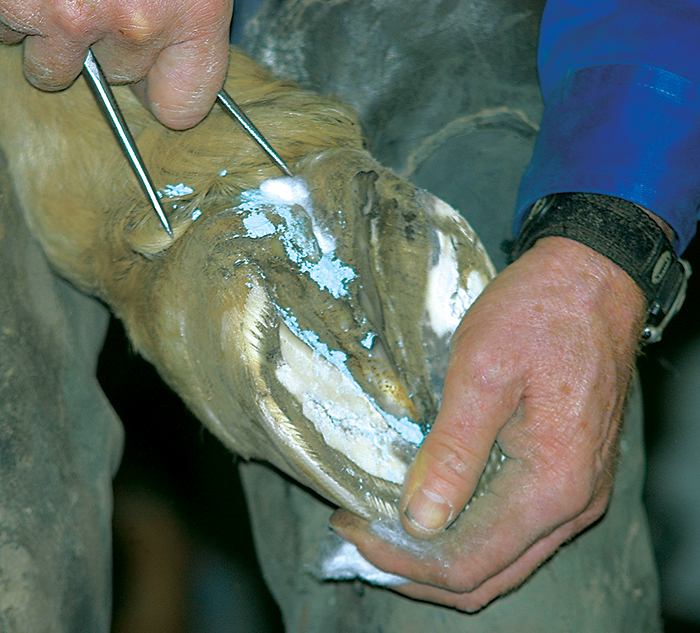 By Heather Smith Thomas posted on July 1, 2009 | Posted in Diseases

When thrush has gotten deep into the central sulcus of a frog, pushing cottonballs soaked with a topical treatment into the area may be effective. Copper sulfate is being used here by Mequon, Wis., farrier Red Renchin

Among the most common problems farriers deal with are thrush and white line disease. Thrush, affecting the sulci of the frog and sometime deeper tissues, is generally caused by bacteria. The most common culprit is fusobacterium necrophorum, which causes a variety of diseases, including navel ill/joint ill in foals, diphtheria in calves and foot rot in cattle.

White line disease (WLD) affects the middle and thickest layer of the hoof wall — the stratum medium — between the outer hoof wall and the insensitive laminae (also called the stratum internum). This disease is caused by keratin-digesting fungi, which enter the hoof through a separation in the hoof wall.

WLD generally starts at the bottom and eats its way upward, creating a separation of the hoof wall and hollow areas between the layers. There are several types of fungi that have been implicated. Treatment consists of opening the damaged area and trimming away all the diseased horn tissue, then treating with a product to kill the fungi.

A number of antiseptics and caustic products have been used over the years for treating thrush and/or WLD. Some are still in use and new products also have been developed.

Prevention is the best treatment for thrush. Keeping the horse in a dry, clean…

Understanding The Common Problems Of The Hoof And The Foot

Get A Leg Up On Common Foot Woes