What is the best tool modification that you use? What are the steps involved in doing this? 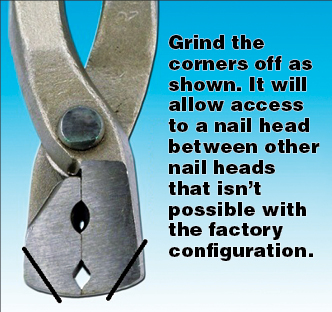 Michigan farrier Rick Dean grinds off the shoulders of his creased nail pullers so it’s able to fit between nails.

A: This is a handy tool modification, especially for those of us in cold climates where we reset shoes with plastic pads and studs all winter or for those working on lameness cases when using a clinch cutter and shoe pullers isn’t a viable option.

It’s also useful when you have a nail between others that needs to be pulled, generally due to improper placement. To avoid bending the shoe out of level or causing pain to an injured foot, I use nail pullers. The problem is that most nail pullers have shoulders that are too big to fit between nail heads, so if a nail needs to be removed between nails the pullers won’t work in their factory form.

The solution is simple. Just grind those unnecessarily large shoulders back enough to fit, being careful not to weaken them too much.

This easy alteration makes an inexpensive pair of Diamond creased nail pullers a useful tool to have.

Henry Heymering makes a hoof pick on the end of one rein on a pair of pull-offs.

A: My favorite tool modification is made to my pull-offs. I make a hoof pick out of the end of one rein. It saves time not having to use two tools to remove a shoe.

Also, I bevel the jaws of the pull-offs to make it easier to move…

Tool Tips From A Tool Master