Taking Horseshoeing Education To The Next Level

By Toby Raymond posted on July 1, 2009 | Posted in Education

Mitch Taylor is trying to raise the bar on horseshoeing education.

Taylor’s Kentucky Horseshoeing School, which already offers a 22-week horseshoeing program, will soon be introducing a 9-month program, to be followed by a 1-year mentored apprenticeship.

“The idea,” says Taylor, a 30-year shoeing veteran who has operated the Mount Eden, Ky., school for 20 years, “is to create a model by which we, as educators, will develop a structured teaching platform that addresses the mechanics and methodology of hoof care.”

Taylor hopes the program will turn out the next generation of experts and minimize the experimentation phase that inevitably occurs when a novice joins the work force.

“Not only is there a potential liability for the horse, the negative buzz among owners can be a death song, which in turn critically impacts the rate of attrition within the industry,” he says.

Taylor believes it is virtually impossible to pass on the knowledge necessary to adequately equip someone to handle the rigors of the business in just a few weeks.

“There’s just too much information relayed in too short a period of time to be adequately absorbed,” he says. “Yet because we are responsible for a live animal, we don’t have the luxury of making mistakes — mistakes that could result in pain and suffering.” 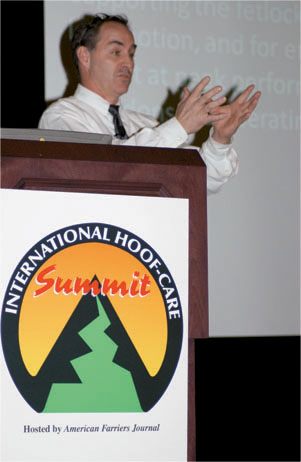 Mitch Taylor, shown during a presentation at the 2008 International Hoof-Care Summit, takes hoof-care education seriously. At his Kentucky Horseshoing School, he’s starting a new program that will combine a 9-month educational…