Pictured Above: Figure 1. Hannah Simms begins forging a rose from bar stock. At a white heat she flattens 5 inches at the end to about 1/8 inch.

Farrier Hannah Simms demonstrated some simple ornamental blacksmithing techniques during Danny Ward’s Eastern Farrier Conference in early November of 2015. The Statesboro, Ga., farrier says that mastering the techniques involved not only helped improve her hammer control, it has also provided her with a nice source of additional income.

While attending Danny Ward’s Horseshoeing School in Martinsville, Va., Simms became interested in an exercise that involved forging small, ornamental roses from a piece of bar stock. Ward recalls her spending hours of her own time practicing the technique.

“She would be out in the shop during the evenings forging roses when a lot of the students would be going to a bar or doing something else,” says Ward.

Simms says there are benefits to learning the process beyond making something pretty.

“It helped me a lot with my hammer skills,” she recalls. “To do certain steps, such as making the stem or adding a leaf, takes really fine hammering. Flattening out the metal works best with overlapping blows, so the entire time you’re flattening, you’re practicing hammer control.”

During the November demonstration, it took Simms about 45 minutes to finish the job. When she isn’t stopping to explain the process, she can finish a rose in about 30 minutes. That’s a far cry from when she started. 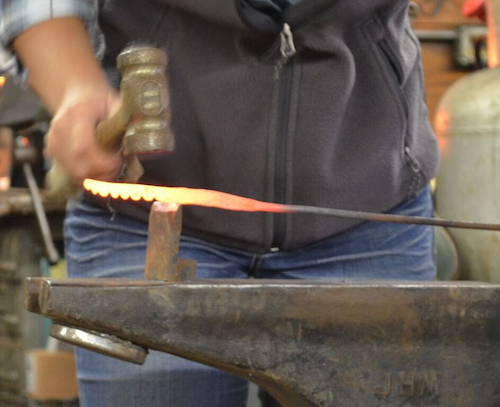 Figure 2. Simms cuts petals into the edges of the flattened area. She starts at the tip, forming smaller petals and then widens them slightly as she moves down the stock.

“It used to take me about an hour and a half,” says the Statesboro, Ga., shoer. “It took me about a month of trying before I made what I considered my first ‘pretty’ one, and about 2½ to 3 months to get to a point where I could do that consistently.

Simms used quarter-inch cold rolled round stock for most of her roses. The step-by-step process involves. 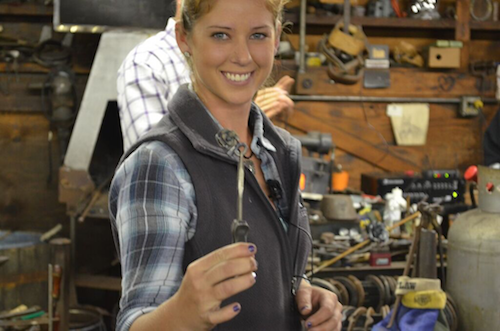 Simms with a completed rose.

Simms started making her roses as gifts for family member, but soon discovered there was a market for them. She set up a blacksmith stand at a local corn maze on weekends and started making her roses and other items, such as barbecuing utensils, and offering them for sale. She gets anywhere from $15 to $30 for a rose, depending on the size and complexity. She says that most are bought as gifts and they’ve become her biggest selling item.