When Trimming, Should You Match The Dermal Frog?

When trimming the frog, it’s important to realize what looks good isn’t always good for the horse.

“You know how sometimes we just take our knives and we just go down the commissures and kind of knife a point?” Danville, Ill., farrier Steve Sermersheim asks rhetorically. “It looks good in the middle and it looks balanced.”

Yet, he points out that a frog pared in that manner doesn’t match the sensitive frog.

“If you look at a dissected frog, it’s nice and round,” says Sermersheim, who is owner and an instructor at Midwest Horseshoeing School in Divernon, Ill. “The dermal frog is nice and smooth. It doesn’t come to a point.”

Using a cadaver limb, Sermersheim suggests an experiment that you can try on your own.

“Take a piece of Plexiglass,” he says, “and put pressure on the frog and see what happens.”

The frog will react differently, depending on the trimming method.

“If the frog is trimmed very sharply and you put pressure on the tips of the frog, the frog moves this way and that,” Sermersheim explains. “If you trim the frog like a dermal frog — make it nice and smooth — and you push on it, the frog expands closer to the center of the hoof.”

The dermal frog is nice and round and does not come to a point. Danville, Ill., farrier Steve Sermersheim advises to trim the external frog in the same manner. 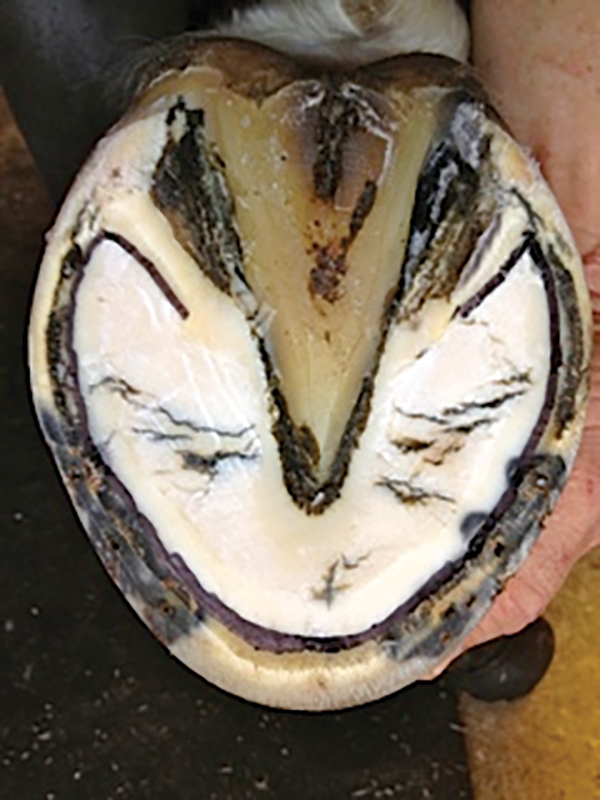 A frog that’s been properly trimmed improves function and matches the dermal frog.

For more tips from Sermersheim on trimming the frog, pick up the January/February issue of American Farriers Journal.