How To Discourage Horses From Kicking

By Jeff Cota posted on February 12, 2016 | Posted in Safety & Healthcare
Pictured Above: Hall Of Fame equine veterinarian Hans Castelijns uses rings from 2/3-inch round stock and ties them to a horse’s leg to discourage it from kicking.

Do you have a client with a spirited horse that has a penchant for kicking stall walls?

Italian farrier and equine veterinarian Hans Castelijns didn’t have just one and the phenomenon was troublesome.

“We have a lot of fractures on hind feet from horses that kick,” the Hall Of Fame equine vet told attendees at last week’s International Hoof-Care Summit in Cincinnati, Ohio. “At minimum, they rip off the shoes and ruin their hoof walls. At worst, they fracture their coffin bone.”

“They travel all through the day to get to the racetrack,” Castelijns says of the horses Rivas shoes. “They’re all freshly shod, they’re all primed, they’re full of energy, they’re in a new stable environment and then some of them start going crazy and kicking.”

Rivas’ solution? Apply non-kick rings or bracelets that wrap loosely around the top of the foot. 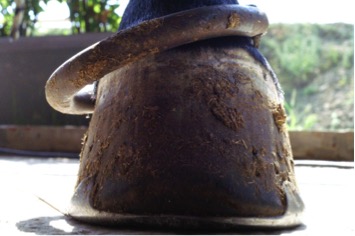 The ring weighs about a pound and makes the horse uncomfortable when kicking. Otherwise, it doesn’t bother the horse, Castelijns says.

“He told me to make some rings from 2/3-inch diameter round stock,” Castelijns recalls. “Drill a little hole on each end. I round off the endings so it’s just wide enough to go over the pastern. Then, thread a little shoelace through there to hold it there.”

He has enjoyed success with it from the start.

“They immediately stop kicking,” Castelijns says. “When it’s 2/3 of an inch thick, it has more weight and it’s uncomfortable when they kick. When they don’t kick, it doesn’t hurt them. You’d think that a Thoroughbred with this will go crazy and hurt itself. They just stand there, because when they kick it goes up to the fetlock and back down to the coronary band. They realize it’s better to stop kicking.”

Do you have a helpful tip that could benefit other farriers? Send them to Jeff Cota at jcota@lessitermedia.com.

How To Easily Remove Rust From Your Tools

Need To Finish? Make A Gouge From An Old Clinch Cutter

How To Ensure A Horse Can Tolerate Positive Frog Pressure