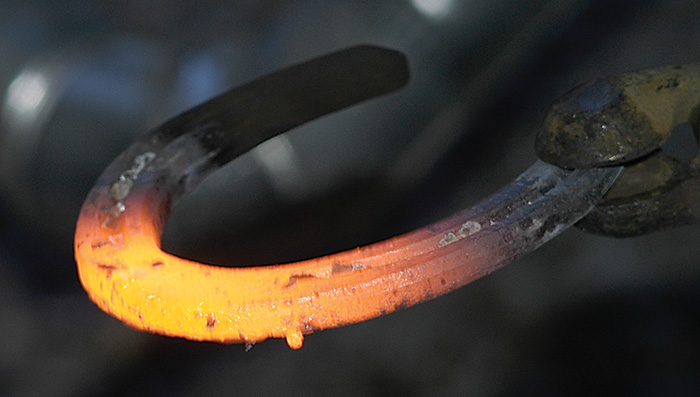 By Pat Tearney posted on January 1, 2005 | Posted in Education, Forging

Dennis Manning demonstrates benefits of knowing how your stock works

PROTECTION AGAINST WEAR. Dennis Manning demonstrates adding scrap iron to the toe of a shoe during a clinic at Mint Vale Forge in Cambridge, Md.

Dennis Manning of Roosevelt, Utah, has a well-earned reputation as a horseshoer, blacksmith and toolmaker. One of the reasons for that reputation is his understanding of the science behind those crafts, as he demonstrated during a clinic at Dave Ferguson’s Mint Vale Forge in Cambridge, Md., late last year.

Manning, a member of the Inter­national Horseshoeing Hall Of Fame, demonstrated how an understanding of metallurgy can improve your forging and shoeing techniques with a couple of simple demonstrations he performed during the clinic.

First, Manning showed how he uses scrap cast iron to add strength to the toe of a shoe.

“You can add an area of cast iron to the toe of a shoe because the cast iron melts at a lower temperature than a steel horseshoe will,” he explained.

Manning says he’s used scrap iron from old sewer pipes for the purpose, which basically adds a coating of harder iron over the softer steel of the shoe. He says you can accomplish this in four simple steps.