Time To Slow Down After Trimming And Shoeing 15,000 Mounted Police Horses

After 54 years of trimming and shoeing the horses in the New Orleans Police Department, Johnny Argus is handing over the work to another farrier. During more than 5 decades of mounted police shoeing work, Argus has likely been involved with over 15,000 trims and shoes for these law enforcement horses that enjoy new footwear every 30 days.

The Lacombe, La., farrier isn’t getting out of farrier work entirely, but says it’s time to slow down, relax and enjoy life with his wife Jeanette and family. However, his idea of slowing down means he expects to continue to trim and shoe three or four riding and backyard horses a day.

Gary Casler, who has assisted Argus in the law enforcement stables, will take over the police horse footcare duties.

“These police horses are crossbred Percherons and weigh 1,500 to 1,600 pounds,” Argus says. “When they leaned on me, I could certainly feel it. I’m in my early 70s, have been getting a little burned out from full-time farrier work and have recognized that it’s time to slow down a little.”

As a teenager, Argus started working on the police horses with Crescent City farrier Lawrence Leonardi, whom he credits with having a favorable influence on many of today’s veteran New Orleans farriers. At that time, Leonardi had the only remaining blacksmith shop in New Orleans.

Back in the July/August 1998 issue of American Farriers Journal, we produced a five-page article “Where The Rubber Meets The Road” that described the work Argus and fellow farrier Milton Reggio were doing with the horses in the New Orleans Police Department. Check out a number of valuable tips Argus suggested for working with law enforcement horses on city streets.

An Up Top View

Argus says the New Orleans police department has 28 horses that are used daily for routine patrolling in the French Quarter area. The horses are also used extensively for crowd control during the 3- to 4-week mid-winter Mardi Gras festivities.

Argus says a policeman on horseback can see as much while viewing the action on city streets as it takes a dozen patrolmen to see on foot.

“Most city folks don’t know anything about horses,” he says. “So when a police horse gets involved in crowd control, the folks are pretty quick to disperse.”

At the same time that he is giving up the farrier work with the mounted police horses, Argus is handing over the trimming and shoeing work with the mules that are used for carriage rides in the French Quarter. That Royal Carriage Co. work is shifting over to farrier JC Caygle III, who has worked with Argus and Gary Casler for a number of years. 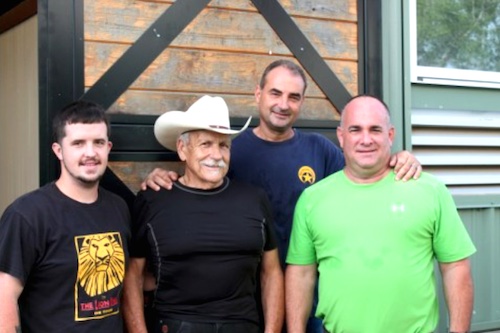 Argus started shoeing with Lawrence Leonardi at the Royal Carriage Co. and ended up shoeing for three generations of the family’s owners. The oldest continuous-operating carriage company in the U.S., this firm has 60 mules. Some 30 mules at a time are used to pull the French Quarter carriages while the other 30 mules are alternated with a 3-month pasture rest.

Argus is convinced rubber horseshoes are the best bet for the New Orleans mounted patrol horses since the shoes readily absorb impact, reduce strain on the feet and make shoeing easy for farriers. He says the New Orleans police horses were shod with rubber shoes when he started working with them back in the early 1960s and are still shod that way today. He believes there’s nothing better than rubber shoes for horses being worked extensively on blacktop or other hard surfaces.

“Police departments in a few other cities say they’re going barefoot with their horses, but that’s not true as they’re relying on hoof boots to protect the feet,” he says. “Boots are expensive, wear out fairly quickly and folks take them on and off. Some people like them, but I don’t trust them, and still believe rubber shoes are the best solution for the New Orleans police horses.”

After 54 years of successfully tacking on rubber shoes for street work in New Orleans, who’s going to argue with Johnny Argus?

Plenty to Do with 600 Horses to Shoe