By Michael Austin posted on April 1, 2003 | Posted in Therapeutic Shoeing

As acute laminitis sets in, the Aqua Boot can be used to make the horse more comfortable until help arrives

After watching colleagues fumble around with different methods to comfort the horse during early stages of acute laminitis, Wiltz started brainstorming.

“I’d watch these guys soak horses’ feet in ice buckets for laminitis,” recalls Wiltz, a 22-year veteran of the horseshoeing business. “The horse would step out, kick the bucket over and it really didn’t work. I just thought that there had to be a better way of doing it.”

Wiltz started with a wrap for the horses’ hooves, and, as he says, “one thing led to another and here I am with the Aqua Boot.”

What It Is And How It Works

The Aqua Boot consists of a thick, dense sponge with a thin piece of water-proof material wrapped around it. Velcro-type adhesive on part of the waterproof material sticks together to keep the boot tight around the hoof. Wiltz says you can either soak the boot before wrapping it around the hoof or after the boot is already on. 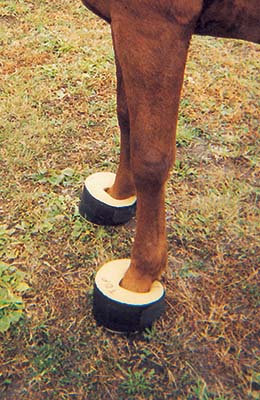 AQUA BOOT TO THE RESCUE. Bill Wiltz developed the Aqua Boot to provide relief for horses suffering through early stages of acute laminitis. The boots buy the horse owner time and…