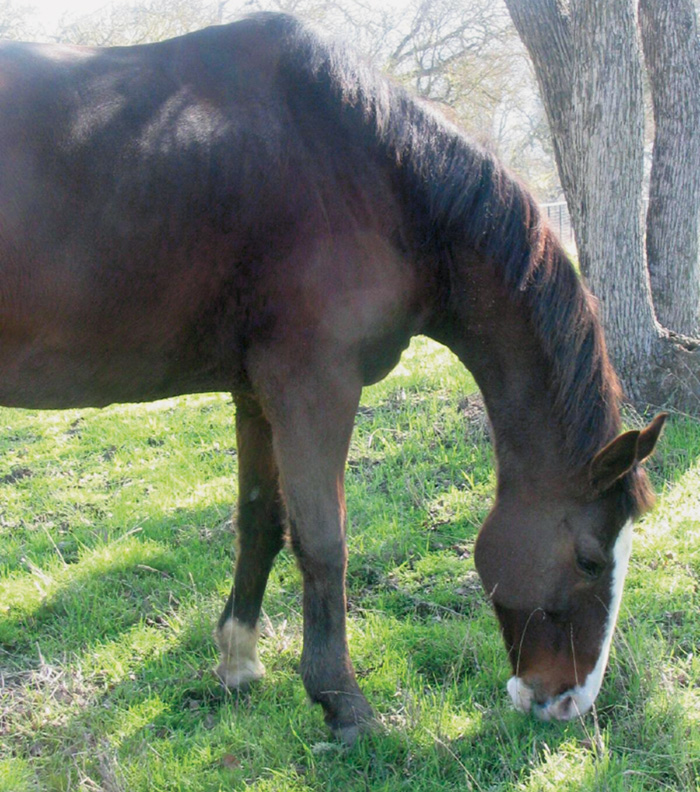 Five Years with a Founder Case

By Monique Craig posted on July 1, 2007 | Posted in Lamenesses

FOUNDER FIGHTER. Refreshing Pause, or RP, in February of 2006.

Although I first heard about this founder case in December 2001, I was not able to help with the horse until February of 2002. I ended up adopting “Refreshing Pause” (a.k.a. RP) 8 months later and she stayed with us for almost 4 years until she was euthanized in August 2006 at the age of 23.

RP had foundered in early spring of 2001 after foaling, due to a retained placenta. She had raced until the age of 3 and was retired as a broodmare due to a racetrack injury (she broke her left leg at the track).

I was called to help this mare as a last resort. RP was a week away from being put down when I started to get involved with her case. The radiographs did not look good, but that was nothing compared to the state of her hooves. RP’s entire hoof capsules were practically dead. Large pieces of wall came off in my hands as I touched the hooves.

The situation appeared even worse when I looked at her soles. They were thin, weak and had dropped a great deal. I started to wonder what I had gotten myself into! I heard that a couple other farriers had declined to work on this case. I managed somehow to glue composite shoes on her hooves. I was not very optimistic about the outcome of my shoeing. When I started to work on this…

Using An Evidence-Based Treatment In A Fractured Navicular Bone Case