Sometimes you can tell a book by its back cover. The Chosen Road, Achieving High Performance Through Applied Equine Podiatry by KC La Pierre is one of those. Although the front cover waves no red flags (unless you consider “A Comprehensive Guide To Whole Health Hoof Care” a warning sign), the back cover begins to tell a different story and leaves potential readers either intrigued or suspicious.

It’s there that the recently released book announces itself as a “cutting edge alternative to the traditional farrier practice” and touts “barefoot equine podiatry.” It also refers to La Pierre’s original concept of Deformed Hoof Syndrome and his trademarked HPT method of treatment.

But if those words ring alarms for conventional shoers, La Pierre’s credentials offer some assurance that he is one of them. He notes that he has been a farrier for more than 20 years, is a member of the Guild of Professional Farriers, a Registered Journeyman Farrier and a “traditional” journeyman blacksmith.

Don’t be fooled. La Pierre states clearly that he does not think like the great majority of farriers. In the introduction, he describes The Chosen Road as “not a book dictated by convention or tradition” and “a book on hoof care that is controversial, one that will take you and your horse down a different road.”

He writes, “Traditional farrier sciences are fixated on following a road that can only lead to further dependency on that which is unnatural.” 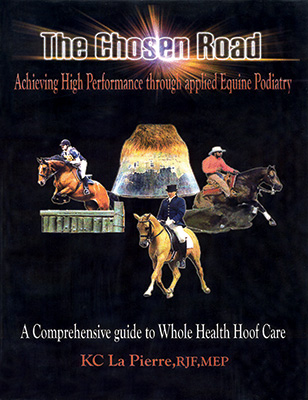 Recommending And Selling Products | Barefoot During The Winter