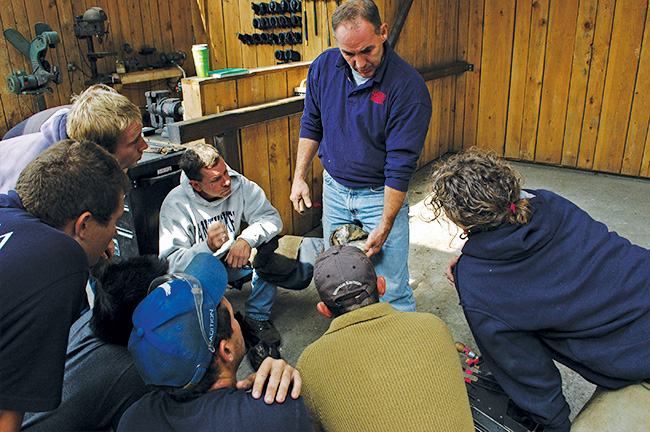 By Jeremy McGovern posted on December 1, 2010 | Posted in Education

Mitch Taylor, center, sees that students who graduate from long courses “not only have had sufficient time to master the fundamentals, but most serve apprenticeships.”

With a second back problem hindering his farrier practice back in the 1980s, Mitch Taylor wanted to change his career to become a hoof-care educator.

As fortune would have it, Don Canfield, then the owner of the Kentucky Horseshoeing School (KHS) in Mt. Eden, Ky., wanted to sell it. The school was in a dilapidated state, both structurally and academically.

“When it rained at night, students would have to get out of bed and empty drip buckets,” recalls Taylor. “There was no curriculum, no direction.”

Taylor took over the school, improved it and operated at the same location until last year. Then in January of this year, he officially opened a new campus for the school, located just southeast of Lexington in Richmond, Ky. The new facility features a stand-alone dormitory, as well as two classrooms, offices and separate gas and coke forge shops.

Martin Zimmer, one of the instructors at the school, is a fan of the new complex. “We can work with completely new students in one shop,” he says. “We have more space to move around. It’s nice to have everything under one roof, rather than separate buildings.” 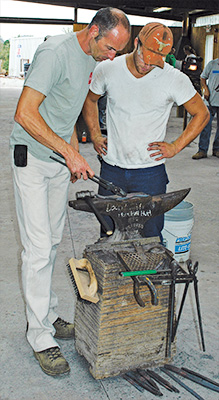 The gas forge shop allows Martin Zimmer, left, and the other instructors to monitor and provide assistance to the students. “In the beginning, new students lack the experience in the fire, so it is…

Cincinnati: A Beacon Of Hoof-Care Education

Continued Education is the Name of the Footcare Game