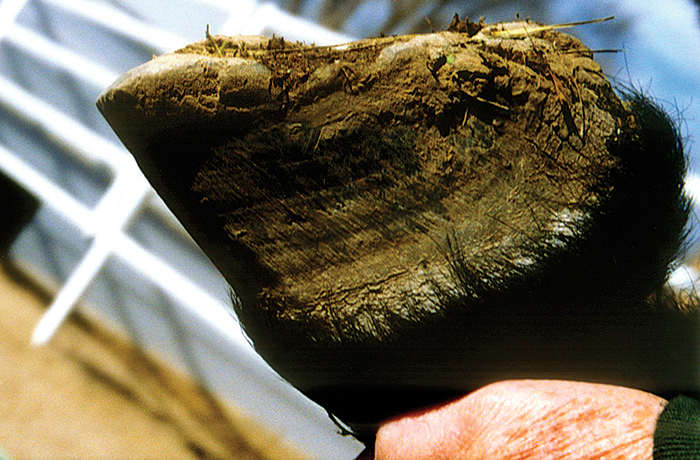 Cooperate with Nature and Science When Balancing the Hoof

FIGURE 1. A sound, domestic bare foot that is self maintained.

Achieving hoof balance comes easily once you know where to start, says Gene Ovnicek, a farrier with Equine Digit Support Systems in Penrose, Colo. The key is finding the widest part of the hoof, which then allows for correctly locating P3 and trimming and shoeing for proper support and breakover around P3.

Ovnicek says that many domestic horses often posses misleading hoof capsule distortions that occur because the foot has not been allowed to wear or be managed naturally. He says such hoof distortions are so common that farriers routinely mistake them for normal.

Many farriers expect and rely on the coffin-bone-to-hoof-capsule relationship to never change. “In fact, hoof capsule distortion is very common and increased leverages on the coffin joint are the end result,” he says.

Another problem is the widely held belief that only the hoof wall should bear the weight of the horse, he adds. That belief hinders a farrier’s understanding of foot biomechanics and their ability to identify common hoof distortions, and it can lead to improper trimming and shoeing, according to Ovnicek.

“There is a lot more to the foot than what I was taught when I started to investigate the hoof from a farrier’s perspective. At one time, I believed the hoof wall was what they were supposed to walk on,” Ovnicek says.

“But the science of the horse’s foot is ongoing. A lot of the things that we thought were…

The Widest Part of the Foot