By Frank Lessiter posted on May 1, 2003 | Posted in Education

When it comes to expertise in equine hoof care, the newest inductees into the International Equine Veterinarian Hall Of Fame don’t take a backseat to anyone.

Two college professors, Ted Stashak of Fort Collins, Colo., and J.D. Wheat of Sonoma, Calif., were inducted in the veterinary research and teaching area.  Steven O’Grady of The Plains, Va., is being honored as a practicing veterinarian.

Sponsored annually by American Farriers Journal, this awards program has honored 17 equine veterinarians since its inception in 1997. While nominations can be made by anyone, the actual selection was done by 14 previous equine vets who have been honored and 92 members of the International Horseshoeing Hall Of Fame.

Working as a farrier for 10 years, O’Grady used this income, experience and training to pursue a degree in veterinary medicine. He learned the shoeing trade through a formal apprenticeship under International Horseshoeing Hall Of Fame farrier Joseph Pierce of West Chester, Pa.

After graduating from veterinary school, O’Grady worked for 2 years in Cape Town, South Africa, before returning to the United States. After spending 5 years at the Georgetown Equine Hospital in Charlottesville, Va., he opened his own veterinary practice that is devoted to equine podiatry work in The Plains, Va. 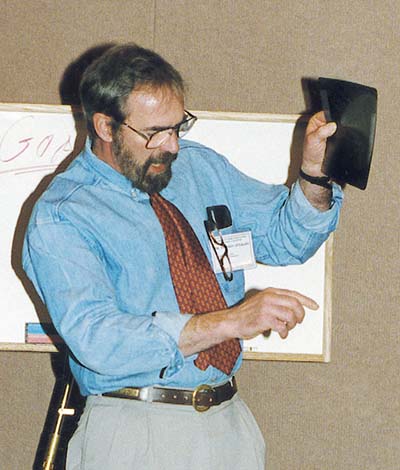 STEPHEN O’GRADY. Working as a farrier for 10 years, he used this experience and training to pursue a degree in veterinary medicine.

O’Grady has published numerous articles, including a number of extremely valuable articles for American Farriers Journal…