The Hoof Of Fire Horse Number 12 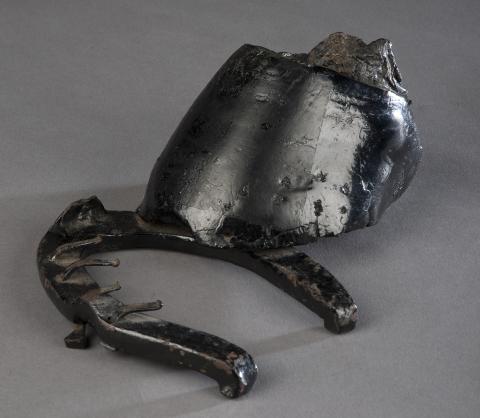 By The National Museum Of American History

In the early morning hours of March 30, 1890, in Washington, D.C., the collision of two horse-drawn fire wagons racing to answer an alarm seemed a minor matter. The vehicles — a hose cart and a heavy steam engine — continued on their way to the fire.

As they raced across town, the driver of the hose cart noticed that one of his two-horse team, Horse No. 12, limped somewhat. When they arrived at the scene of the alarm, the horse pulled up lame.

The driver made a shocking discovery. The animal had lost its left rear foot, apparently run over and cut off in the collision with the heavy engine. The beast had galloped to the fire — nearly a mile — on its stump. Through the tears of attending firefighters and policemen, it was quickly put down with a shot.

No one had ever known such an animal as Horse No. 12 — conditioned by the chaos of the city's emergencies that in this instance was his last. In an era in which horses and horse-drawn vehicles predominated in daily life, the newspapers noted that the "equine hero" had "performed a service that was perhaps never before equaled."

The story went viral. Such was the outpouring of affection for the beast that one reader in Indiana suggested that the city's authorities might have saved it with a bandage and retired it to pasture — contrary to practice at the time.

Cauterized and preserved with a coat of shiny black enamel, the hoof of Horse No. 12 lived on as a memorial in the District of Columbia Fire Department. The Smithsonian exhibited the hoof as a loan, and later accepted it as a gift through the department’s chief engineer, R.W. Dutton. Its placement in the National Museum, Dutton hoped, would "perpetuate the memory of an animal whose bravery and devotion to duty placed him high upon the department roll of honor."