Shell Of A Time

By Michael Austin posted on May 1, 2002 | Posted in Education

Massachusetts farrier comes to the rescue of an injured turtle

It's one thing when a horse owner calls you out of the blue for an emergency shoeing, it’s another thing when the local veterinarian asks you to save an injured turtle.

But, that’s exactly the situation Jeff Houston found himself in last July. The Montgomery, Mass., farrier wasn’t about to save just any turtle, this was a wood turtle, which may not be endangered but does reside on several states’ protected species list. If Houston hadn’t acted fast, the turtle never would have made it out to the wild again, and probably would have died at the vet’s office.

Houston received a call from Mount Tom Veterinary Service, Inc., last July. The clinic had just admitted an injured wood turtle (it was hit by a car) and was desperately searching for answers about how to save its life.

A staff member of the clinic in Holyoke, Mass., knew that Houston had rebuilt hooves with acrylics, so the clinic gave him a call. 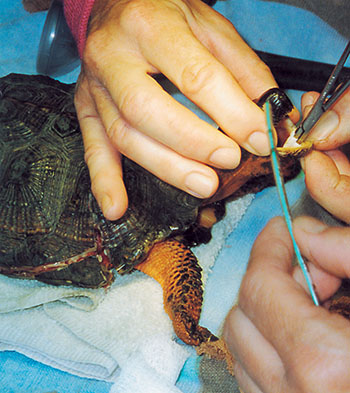 FEISTY FELLOW. The wood turtle needed anesthesia for Houston to do his repair work.

When he arrived, Houston realized that this wasn’t going to be a 15-minute project.

“When I saw the turtle I knew it was going to be a more serious problem than I had anticipated,” Houston says.

Houston hung up his nippers and grabbed some smaller tools. The little patient was a bit snippy, so the veterinarian and her assistants had to give the turtle some anesthesia.

Hands-On Clinic Continues To Be A Crowd Favorite

Plenty Of Hooves, But No Horses!