Forging By The Marshall Plan

By Pat Tearney posted on January 1, 2003 | Posted in Forging

Attention to small things, breaking job down, among the lessons taught by anvil master

Bob Marshall holds a shoe up to the light and checks the toe after a couple of quick blows.

“There you are,” he says, holding up the shoe for inspection. “Now do you really think you need to buy blunt-toe keg shoes?”

It took Marshall less than 30 seconds to put the blunt toe on the shoe, once he’d pulled it from a propane forge.

No big deal? Then consider this: He didn’t use a hammer; just his tongs and the anvil. The entire operation was done by striking the shoe at varying angles against the anvil’s face.

Sure, it’s probably more a gimmick than anything else, but it shows what Marshall is capable of — and helps explain why even veteran farriers known for their forging skills seek out his clinics and tutoring. 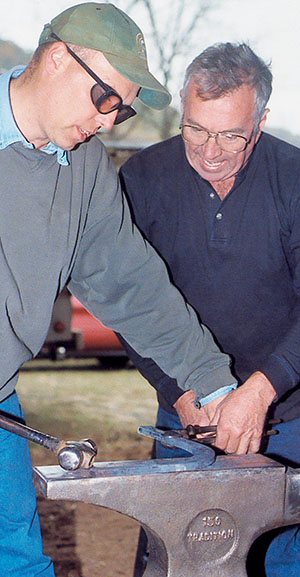 MENTOR AT THE ANVIL.  Bob Marshall, right, corrects Terry Holst’s tong grip during a clinic in Minnesota. Holst, a member of the American Farrier’s Team, says there is still a lot he can learn from working with Marshall.

Marshall’s legendary forging abilities arise largely from hours and years spent at the anvil, but his strengths as a teacher and instructor were also on display at a recent clinic in eastern Minnesota. Those skills include a keen ability to analyze his students varying levels of ability, his attention to minute details and an uncanny knack for breaking down complex ideas and procedures into more…

The Man with a Plan