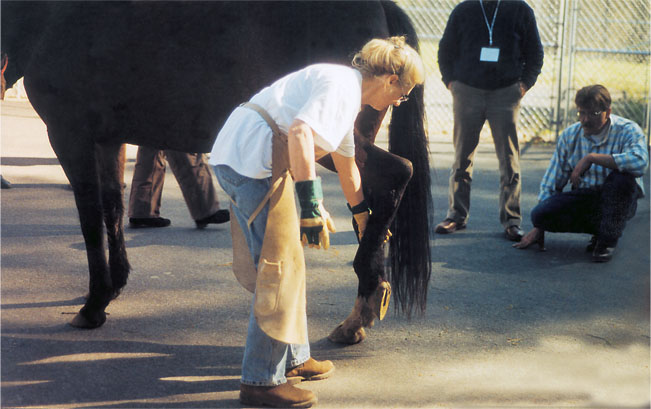 Contrary to what some may have expected, farriers did not try to crucify Hiltrude Strasser with horseshoeing nails during an early May seminar at the Tufts University School of Veterinary Medicine.

Still, it’s safe to say a wide gulf will continue to exist between most farriers and the German veterinarian and her disciples.

Farriers and others in attendance at the 2-day event in North Grafton, Mass., gave a respectful hearing to Strasser's controversial (at least in the shoeing community) theories and actually voiced agreement with much of what she had to say.

But not always. And “always” seems to be where Strasser and much of the rest of the hoof-care community part company. “There’s too much always,” said Pete

Ramey, a natural hoof-care advocate who manages between 300 and 400 barefoot horses in Georgia. “Animal care has to be subjective. You can’t put it in a can like this. Everyone here will say barefoot can be good for a horse. But we can’t say always.”

No Room For Shoes

It’s possible that Strasser wouldn’t mind seeing a horseshoe hanging over a door for luck, but she makes it very clear she doesn’t think they ever belong on horses’ hooves. In effect, her prescription for returning lame and ill horses to sound condi- tion begins with removing the shoes from shod horses as the first step in returning the horse to its natural state.

Panelists agreed that many — perhaps even most — horses would not suffer from going barefoot. But…

Hoof-Care Email Q&A: Can you describe any hoof or foot problems that you encounter more often during the winter months?